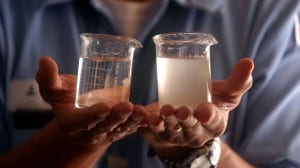 As California faces its most severe drought in recorded history, the West Basin Municipal Water District Board of Directors took action and voted to begin an Environmental Impact Report (EIR) as part of its research to build a full-scale ocean-water desalination facility in the South Bay. By initiating the EIR, West Basin will evaluate all environmental impacts associated with building and operating a 20 million gallon per day (MGD) and a 60 MGD ocean-water desalination facility.

Engineering projects identified to have potentially significant impacts to the environment are required to quantify these impacts as stated in the California Environmental Quality Act (CEQA). The EIR will quantify impacts attributed to the intake, discharge, air quality, greenhouse gas emissions and more. This document will not only identify and quantify impacts, but determine how much mitigation would be required for the facility to have a net zero environmental impact.

Since 2002, West Basin has conscientiously tested the feasibility of ocean-water desalination with a focus on protecting marine life and minimizing costs through reduced energy and chemical consumption. West Basin has participated in the regulatory efforts that have helped shape California’s ocean-water desalination policies. The recently finalized desalination permitting process adopted by the State Water Resources Control Board on intakes, discharges and mitigation are the first of its kind in the world.