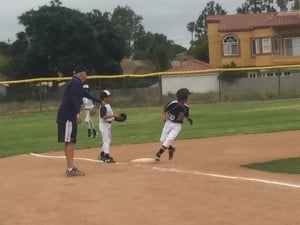 The Culver City 10/11-year-old All-Stars defeated Beverly Hills on Monday July 6, 2015 by a score of 5 to 2, advancing to the semi final game against North Venice on Wednesday.

Ace pitcher, Andy Perez dispensed with Beverly Hills on just 54 pitches in the six inning game, Perez allowed just three hits, while striking out three and walking no one. Perez was helped out by a stellar Culver City defense, which converted all but one play. Beverly Hills was thoroughly baffled, as it hit just one ball out of the infield during the game.

Culver City jumped out to a 2-0 lead in the top of the 3rd inning on a single by Andy Perez, a single by Stephan Thomas, and a double to the left centerfield fence by Brandon Zeidman. Culver City scored two more runs in the fourth on Jesse Tanahara and Tommy Peacock singles. Culver City got its fifth run on a walk to Leo Matsuoka, a Jared Bojorquez sacrifice, and a single to center by Tanahara.

After the game, Perez was quite complementary to the Beverly Hills team, “They (Beverly Hills) battled hard, they made contact, but my fielders did what they did and we were able to keep them off the board until late in the game. I cannot thank my infield enough for their great play.”

First baseman, Thomas Chee, explained that he loves playing defense in back of Perez, “Andy is just so dominating. He fools the batters, and when they do make contact, it’s generally a lazy pop fly or an easy ground ball. He makes us look good as fielders.”

If Culver City defeats North Venice on Wednesday, the team advances to the championship series against undefeated West LA on Friday at 5:00 pm.