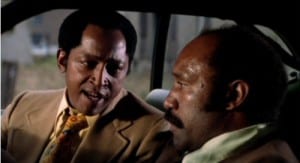 This month Black Talkies on Parade screens the underrated and rarely broadcast film The Spook Who Sat by the Door (1973), directed by Ivan Dixon and based on a book of the same name written by Sam Greenlee. This unique film is a mixture of many genres including political thriller, satire, comedy, and blaxploitation. In 2012 the Library of Congress named the film to the National Film Registry to recognize its importance in American film history. The film stars Lawrence Cook as Dan Warren, a secret black nationalist who is hired to join the ranks of the C.I.A. Don’t miss this remarkable film with a score composed by Herbie Hancock. Following the screening there will be an audience discussion led by resident film scholar, Les Wills.