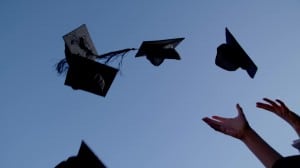 Yes, “graduations,” also known as “commencements,” are beginnings. Let’s acknowledge, though, that they are absolutely endings, or, as we say in the English teaching business, “transitions” from one paragraph of life, to another. For the past fourteen out of my fifteen years as a full-time teacher here at CCUSD, one, the other, or both, of my sons have gone to school with mom lurking on campus, or at the school next door. At a city-wide “Shake Out” earthquake drill several years ago, I was euphoric to be out on the field with not only my classroom of students, but with BOTH sons within my sight out there; not that I’d ever wish for a natural disaster, but, I felt solace in that both would be with me in that worst case.

And now the youngest son goes off to college. My son, Michael, whose name can be viewed in electric blue waving across the marquee in front of Robert Frost, will attend UC Berkeley, as dreamed. To name a few of his accomplishments: he earned the “HH” of highest honors from the California Scholarship Federation (CSF), he earned a “Bi-Literacy Seal” for four straight (actually 13 straight, but who’s counting) years of Japanese study. He was voted Prom King, and “Best Eyes” (my eyes – as much as it irks him when I say it) in the yearbook. He was Parliamentarian at the Culver-Palms YMCA’s Youth in Government, having spent three years with that organization. He created and worked to implement a Speech and Debate Club during Culver City High School’s new Centaur Plus (a flavor of what I like to call the “Advisory-Enrichment-Intervention-Options-Universe” within a school day. For what is the small village of our family, our schools, and of course, for Michael, what a job well done!

And he is joined by a student body that I know well and love dearly. Counting names on the program, I figure I know maybe half of the graduating class by name and sight. There are Michael’s friends, of course, but then, I taught about a third of the students 6th and/or 7th grade English when I was at Culver City Middle School. As GATE Coordinator, I got to know about two to three hundred of them. And finally, in my new capacity working this past year as what we call “Gifts Advisor” and “Programs Coordinator” of Culver Park High School, it was literally my job to ensure our twenty or so twelfth graders walked that stage. The journey through these past years as first a parent (since 1999), then a part-time employee (since 2000), then also a resident (since 2003), and finally a full-time employee of the district since 2004 has been the most significant journey in my life in so many ways.

I’d be remiss to let this school year end without rhapsodizing about the work we have done this year at Culver Park High School. Culver Park High School, for readers not in the know, is one of three schools CCUSD has as an answer to alternative education, right here in “River (Ballona Creek) City.” To quote Ruth Morris in Culver Currents in Print (October 2014), my job was to “channel student gifts (because it) fills buckets more than attempting to cure their shortcomings.” In the March 2015 issue, Morris wrote, “We provide a warm, caring haven for our students, proactively seeking opportunities for our students to shine.” Finally, in the May 2015 issue (re-prints of all these issues can be found on the CCUSD web site, by the way), Ruth Morris cited “Four C’s” that were built in to the two C’s in Culver City: Confidence, Community, Capability and Culture.

So, in the end, graduation is a time, above all, for thankfulness. And gratitude is demonstrated through ceremony; whether praising the lord, or praising our family and friends, or praising ourselves. Appreciation can be expressed orally, symbolically, or through actions, and graduation is all of that, wrapped up in, as our high school administrators are telling the students, a “formal” way. I have always been the type to love closure; I like year-end celebrations, because you get to look forward to a fresh start. I generally like to make sure I’ve said my goodbyes (I know some people who hate goodbyes!), because I always feel like you never know if it’ll, heaven forbid, be the “last time” you’ll see a person.

Finally, and back to the commencement part, graduation is absolutely about new beginnings. One of the biggest mistakes made by graduates, from high school, to college, and beyond, is neglecting to figure out what happens next. As I have been trying to impress upon both my sons and as we have been trying to instill in our students here, you don’t just go for the diploma, you go for what we call “Diploma Plus.” Your experience is always that much better, for anything in life, I think, when you know what’s happening on THE NEXT DAY. People get “Monday-itis” and hate reporting to work or school on a Monday, yet, Sundays are actually deliciously better – more joyful, more productive, more relaxing, when you actually know where you are going on Monday. The paycheck, or credit, to be earned, or even just knowing you have a place to hang your hat, is what differentiates the weekend from the weekday.

In both my Jewish and Japanese cultures, we are very much about marking finishes and starts of years (Rosh Hashana and O-Shougatsu) and starts and ends of weeks (Shabbat and Havdalah) and seasonal observations (moon viewing, harvest and other festivals). In the end, ultimately, to conclude…today IS my son’s (and my 12th graders’) graduation day and, I am and will be proud, emotional, a bit tired, relieved, spent, and excited for tomorrow, and of the tomorrows that make up a future of achievement, success, hope, and, above all, health. Congratulations, Class of 2015!!!