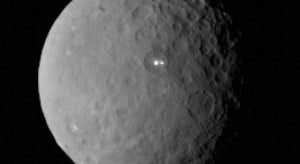 New images of dwarf planet Ceres, taken by NASA’s Dawn spacecraft, show the cratered surface of this mysterious world—including its mysterious “bright spots”—in sharper detail than ever before. These are among the first snapshots from Dawn’s second mapping orbit, which is 2,700 miles above Ceres.

The region with the brightest spots is in a crater about 55 miles across. The spots consist of many individual bright points of differing sizes, with a central cluster. So far, scientists have found no obvious explanation for their observed locations or brightness levels.

“The bright spots in this configuration make Ceres unique from anything we’ve seen before in the solar system,” said Chris Russell, principal investigator for the Dawn mission based at UCLA. “The science team is working to understand their source. Reflection from ice is the leading candidate in my mind, but the team continues to consider alternate possibilities, such as salt. With closer views from the new orbit and multiple view angles, we soon will be better able to determine the nature of this enigmatic phenomenon,”

Numerous other features on Ceres intrigue scientists, as they contrast this world with others—including protoplanet Vesta, which Dawn visited for 14 months in 2011 and 2012. Craters abound on both bodies, but Ceres appears to have had more activity on its surface, with evidence of flows, landslides and collapsed structures.

Additionally, new images from Dawn’s visible and infrared mapping spectrometer (VIR) show a portion of Ceres’ cratered northern hemisphere, taken on May 16, including a true-color view and a temperature image. The temperature image is derived from data in the infrared light range. This instrument is also important in determining the nature of the bright spots.

Having arrived in its current orbit on June 3, Dawn will observe the dwarf planet from 2,700 miles above its surface until June 28. In orbits of about three days each, the spacecraft will conduct intensive observations of Ceres. It will then move toward its next orbit of altitude 900 miles, arriving in early August.

The Dawn mission has achieved several important “firsts” in space exploration. It is the only spacecraft ever to orbit two destinations beyond Earth and the only to orbit an object in the main asteroid belt between Mars and Jupiter. The giant protoplanet Vesta was confirmed to be a fascinating world more closely related to the terrestrial planets (including Earth) than to typical asteroids. Dwarf planet Ceres, larger yet less dense, is believed to have a large amount of ice and may even have subsurface liquid water. Ceres was the first dwarf planet discovered and Dawn is now studying it in detail.

More information about Dawn is available at the following sites:
dawn.jpl.nasa.gov
www.nasa.gov/dawn