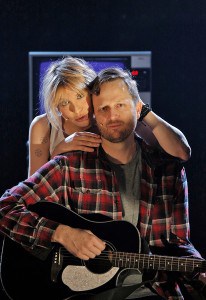 “I am pleased to announce a season with the range and imagination and talent that have come to define the Kirk Douglas Theatre,” said Ritchie.

“In 2005, Center Theatre Group opened the Kirk Douglas Theatre with the promise of adventurous, boundary-pushing fare – tantalizing, thought-provoking, moving and witty work that is making its mark on the local and national theatrical scene. With our 2015-2016 season, we continue that tradition with great pride.”

“We welcome back the always intriguing Geoff Sobelle with open arms,” said Ritchie. “His new piece ‘The Object Lesson’ is an immersive theatrical installation that will transform the Douglas, and the audience, as he humorously reminds us how the clutter of stuff can take over our lives.

“Next is a rare treat: Todd Almond and rock icon Courtney Love ( pictured above) in a new musical piece, ‘Kansas City Choir Boy,’ with music and lyrics by Almond. Talent and charisma will flow as the Douglas becomes an intimate club setting, and the story of love found and love lost is told. ‘Kansas City Choir Boy’ is a special DouglasPlus event and once again proves just how unique our DouglasPlus programming is.”

“I’ve had my eye on the work of Young Jean Lee for some time now,” said Ritchie. “It is great that we are not only welcoming Young Jean to the Douglas and presenting her newest work, ‘Straight White Men,’ but CTG has also co-commissioned this piece about the father-son relationship and the mantle of white privilege. Her sly perspective is eye-opening.

“It’s particularly exciting to present a work that was nurtured at CTG. Sheila Callaghan’s ‘Women Laughing Alone With Salad’ came out of our Writers’ Workshop. Sheila’s bold theatrical style and humor take on the effects of societal pressures on both women and men. Plan on a jaw-dropping time in the theatre.

“We close the season with an event that is so steeped in theatrical history that I am in a bit of awe,” said Ritchie. “Samuel Beckett’s ‘Endgame’ will be performed by renowned Beckett interpreters Alan Mandell, who is also directing, Barry McGovern, Rick Cluchey and Charlotte Rae. Just think of it, most of these actors worked directly with Beckett and we have them on the Douglas stage, passing that insight down to us.”