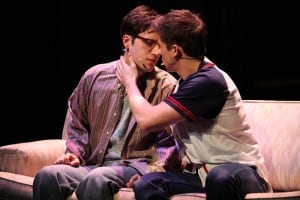 Casting is set for “Girlfriend,” which will begin previews at the Center Theatre Group/Kirk Douglas Theatre on July 12 with the opening slated for July 19. Featuring a book by Todd Almond and music and lyrics by Matthew Sweet, the rock musical about first love will continue through August 9.

Reprising their roles from the 2013 Actors Theatre of Louisville production of “Girlfriend” will be Ryder Bach (Randy Newman’s “Harps and Angels” at the Mark Taper Forum) and Curt Hansen (“Next to Normal” at the Ahmanson). The director is Les Waters, who directed the Actors Theatre production, as well as the world premiere production at Berkeley Repertory Theatre.

Set to irresistible songs from Matthew Sweet’s landmark pop album of the same name, this rock musical gives voice to those who grew up in small towns, to those who didn’t quite fit in and to everyone who remembers the terror and thrill of first love.