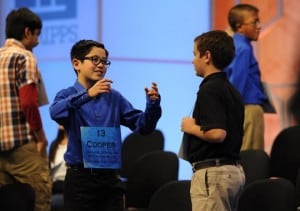 Culver City’s most famous speller, Cooper Komatsu, had a great run at the Scripps National Spelling Bee. He correctly spelled “amarillo” — a noun referring to several tropical American timber trees — and “nockerl” — an Austrian souffle — during the second and third rounds Wednesday.

But it was the written test that proved to be more than adversarial, and Komatsu did not make it into the top ten, just missing out on being a part of the final round.

The national spelling bee, broadcast on ESPN,  has been won by Californians three times, but never by a Los Angeles County resident. This was Komatsu’s second year participating.