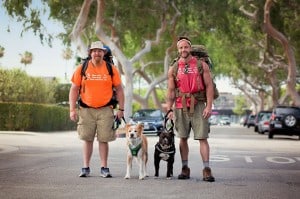 United States Marine Corps veteran Dan Spangler and his dog Spanky’s arrival in Culver City sparked a chain reaction of generosity for their cause. Dan and Spanky have just completed the first 3,500 miles of their nearly 7,000 mile cross country trek from Camp Lejeune, NC to Camp Pendleton, CA to raise awareness and funds for “Operation: Keep Your Spanky,” a new program that provides financial and in-kind assistance for military families and veteran pet owners during times of financial crisis.

Dan adopted Spanky in 2003 when he returned home from deployment. Dan needed months of medical treatment for an injury he sustained jumping from a truck when gunfire broke out at a checkpoint. Looking back, he realizes what an important role Spanky played in both his physical and emotional recovery. “I don’t know where I would be without the companionship that my dog Spanky gave me when I came home from Iraq,” says Dan Spangler, who served as a sergeant in the Marine Corps. “Spanky saved me.”

Animal companions play an important role in the stabilization and emotional well-being of our returning veterans. Dan and Spanky are not alone in their mission. Army Ranger veteran Joe Trainor, Jr. and his dog CT joined Dan and Spanky on their adventure, walking in solidarity.

“As soon as I heard what Dan is doing, I knew I wanted to join in,” says Joe, who runs a dog training facility in Chicago and is the founder of 1Pet1Vet, an organization that pairs a military veteran with a dog saved from euthanasia. Joe is going blind due to traumatic brain injuries (TBI) he sustained on duty in Afghanistan, and knows this may be his last chance to see much of the country he fought for. Like Dan, Joe credits his being alive today to a dog. Joe suffers from post-traumatic stress (PTSD) and after he made the rough transition to civilian life, he fell into a deep depression, sinking so low he contemplated suicide. Right at that moment, a dog leapt into his lap, gazing at him with complete compassion. The dog literally stopped Joe and saved his life.

Dan and I became fast friends several years ago. Although we’re both veterans, it’s our mutual love and appreciation for our furry four legged companions that continues to keep our friendship growing. Dan, Spanky, Joe, and CT, planned to arrive in Culver City on Saturday, May 9, 2015 to simply be photographed by my wife, renowned pet photographer, Lori Fusaro. None of us could have predicted the incredible good fortune that was to be showered upon Dan and his mission.

It just so happened that I had been invited to the Disabled American Veterans brunch to take place that morning at the Veterans Memorial Auditorium in Culver City. The brunch was organized to honor both the outgoing and incoming DAV Presidents. In hopes that they’d be welcomed, I sent word to Dan to drop by with Joe, CT, and Spanky. When they arrived both the incoming and outgoing presidents brought Dan and his clan up on stage to share about “Operation: Keep Your Spanky” with the DAV members.

One member, Air Force veteran Cherlene Aguilar Emfinger was touched by their story. Cherlene, an 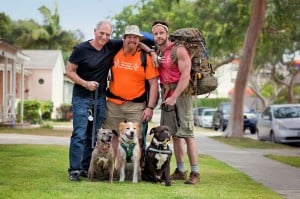 analyst with Sony Pictures Entertainment was enthusiastic to speak with Dan and Joe since she assists Sony in partnering with veteran based non-profits like Dan’s.

Coincidentally on that same day was the Eleventh Annual George Barris Cruisin’ Back to Culver City Car Show. I had the hunch to reach out to Culver City Councilmember Jeff Cooper, who helped organize the event since its inception, and fill him in regarding Dan arrival in Culver City. I hoped that they’d be able to make an introduction on stage during the event. Jeff’s response was immediate, “Have Dan look for me around the stage when he gets there and I will work him in to an intro on stage.”

The timing was perfect. Dan, Spanky, Joe, and CT were joined on stage by legendary Hollywood car customizer George Barris to share their mission with an adoring audience and eager reporters.

“I want all veterans to have a Spanky, but it’s a sad fact that military veterans often experience financial difficulties where they face the heartbreaking choice of giving up their pets,” says Dan. “We are stopping that cycle and promoting responsible, life-long pet ownership,”

Dan hopes to reverse course through Nevada, Arizona, New Mexico, Texas, Oklahoma, Missouri, Illinois, Indiana, Tennessee and through North Carolina, ending at Camp Lejeune. The goal is to be home by Memorial Day on May 25. Dan acknowledges the ambitious nature of this adventure, and plans to keep followers up to date using social media. A tracking device donated by Voyce will monitor Spanky’s steps, while GPS tracking devices provided by Garmin and Pod will provide live web tracking of the journey.

Volunteer support along the route is key. “We will go by any means possible—walking for sure, but we’d also love to get rides along the way,” says Dan. Supporters can volunteer to provide transportation, shelter or “even just buying us lunch” on the Facebook page at Operation Keep Your Spanky or via Twitter @keepyourspanky.

Donations for Operation: Keep Your Spanky may be made through Dan’s non-profit 501(c)(3) foundation and are tax-deductible. Per-mile pledges as low as one cent per mile may be made through athlete.com at www.bit.ly/KeepYourSpanky, and flat sum donations are accepted via PayPal to [email protected]. No donations will be used for lodging, food or transportation during the journey.