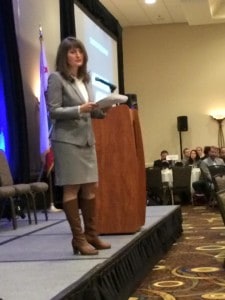 “We really do have a lot to be pleased about,” smiled  Mayor Meghan Sahli-Wells from the stage on April 22, 2015. The common wisdom on the annual mayor’s luncheon holds that the more crowded the room, the more popular the mayor – and the DoubleTree Hilton was indeed packed.

With the AVPA Jazz Band providing the entertainment, people from every service club and city office mingled easily into the early afternoon. ‘The State of the City’ address by Mayor Meghan Sahli-Wells was one that hundreds of Culver City citizens turned out to hear.

After an introduction from City Manager John Nachbar, Harry Culver’s grandson Chris Wilde opened the program, complimenting the city and all those who have worked to make it what it is – He gifted Mayor Meghan Sahli-Wells with a photo taken of Harry Culver after winning a bicycle race.

When Sahli-Wells took the stage to begin her presentation, the crowd rose in a slow standing ovation. She smiled and offered “This is really very helpful, because I’m a bit nervous.” But her nerves didn’t slow her down.

The traditional ‘State of the City’ covers all the progress made in the previous year, and the mayor had much to boast of; the new Fire Chief, David White, the new Police Chief Scott Bixby, the stellar service record of both agencies. With a Powerpoint presentation using gorgeous photographs of the city, both courtesy of the ‘First Man’ Karim Sahli, the mayor was able to illustrate vividly how much

“I have, during the last year, attended 374 meetings, 93 community events and 64 speaking engagements, ” she mused, “that is more meetings than there are days in a year, so there were many days of more than one meeting per day.'”

Noting that the Department of Public Works had as much to be proud of as our safety services, she applauded “The Transportation Department is the winner of the Elite Fleet of 2014, making it the best in the nation.”  The many successes of Parks and Recreation were also lauded, particularly the ‘greening’ of Fiesta la Ballona, which has become a ‘zero-waste’ event, and won an award from the state of California for best marketing campaign.

In addition, both the popular Senior Center and Teen Center were noted for the number of people registered, the success of their programs and the number of volunteer hours served.

The crowd was enthused, interrupting the speech over and over to offer applause. It summed up a great year for the city, and a very good one for the mayor.

In a much more private lunch just a few weeks before, I had a conversation with the outgoing mayor, reflecting on her time in the office.

She sighed deeply when asked what had been the highlight, noting that is was very hard to choose just one. “Can I just tell you how much I have loved this job? I had no idea that I was so well suited to this position, or that this kind of thing would be so fulfilling.”

Pressed to choose between meeting with Vice President Joe Biden and being asked to participate in the Obama Administration’s “My Brother’s Keeper’ program, she observed that while meeting the vice president was great, working on a program aimed at raising successful kids really satisfied her goal.

“When I took office, I challenged the city to make this the best place in America to raise kids, and ‘My Brother’s Keeper’ is directly in line with that.”

She was quite candid about how reluctant she had been to run for council, even before knowing the amount of work it entailed. “I had to be talked into this; I have always seen my self as a community activist, as an organizer, not a politician. So being on the dais was an amazing and unexpected perspective for me.”

After the insights over lunch and the applause at the DoubleTree, I was greatly amused to discover while watching the CCMS production of “The Wizard of Oz” to see Meghan’s son Emilien Sahli performing as the Mayor of the Munchkin City.

If the most important part of raising children is being a good role model, Mayor Sahli-Wells can bow with ease as she leaves center stage to return to a supporting role on the city council.