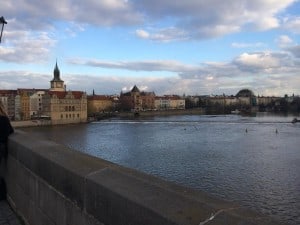 When I was in 7th grade, they made us take a music appreciation class. I don’t have many other memories from what I learned in middle school, but I remember being told to close my eyes, as I sat in one of those little desk-chairs they had placed in the auditorium-style music room. The teacher put on what sounded like a classical piece of music, and asked us to raise our hands to guess what “thing” was being expressed by the music. I don’t remember if anyone got it right (certainly not me; I never raised a hand in those days), but the answer was: a river. He’d played “The Moldau” for us, by Smetana, and explained how the sounds were meant to represent scenes on the river. I went home and told my dad that I liked “The Moldau;” I remember him exclaiming that they’d finally taught me something at school.

And here I am, on the Moldau itself. Except, when I used that term to our 24-year-old concierge, he had no idea what I was talking about. Nor did he understand, when asked about the tour to “”Theresienstadt.” I figured out that those terms are politically incorrect; they are the German words for Bohemia’s beloved river Vltava, and the township of Terezin. You don’t have to have taken AP European history to know why the Czechs, especially young Czechs, would flinch at the German names for their places.

Coming to Prague was the original raison d’être for this trip for me. However, having been to Western Europe recently, I didn’t want to just tack it on to Western European destinations, so the idea of seeing it with Budapest (some guidebooks put the two relatively far-flung and culturally distinct cities in one volume) evolved into the “formerly behind-the-iron-curtain” odyssey that I’ve been writing about over these weeks. I wanted to see Prague, more than for any other reason, because it has been reported by all friends who have passed through before me as, with a sigh and rolling of the eyes, “the best city in Europe,” and/or “the one place I’d live.” I’m here to try and figure out why.

Our arrival in the country was inauspicious. We found out the hard way that the only “easy” way to get 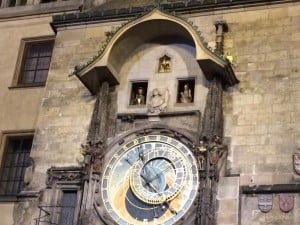 here from Krakow, a place that has much in common with Prague, is by a Super Shuttle-like privately-run “Tiger” van, which drops you off at a remote train station called Ostrava in the eastern Czech Republic. Barely a word of English is spoken at that station, and, forgive the expression, a Nazi-like guard stands at the bathroom wanting the equivalent of a nickel after you’ve been on a bus for over an hour, have to pee, and don’t have any Czech money in your pocket yet.

The train in from Ostrava was delightful, albeit long. But then you arrive amidst the multicolored, architecturally diverse, significantly dated, river-bisected, spire-towered city that was so appreciated by even Hitler, that he preferred to just get rid of as many people as possible, but keep the buildings. At first glance, I stated that I’d wager most people love Prague so much for its bohemian exoticness, compared to the rest of Europe. But that may be for people who have not yet been to the likes of Budapest and Krakow, the way we have. Prague prefaced by those cities is immediately reminiscent of them. Cobbled-stoned streets (I’ve developed a love of the sound of a car rolling over cobblestones), a big town square (or two), with a clock tower and a massive church (or two) can be found all over Eastern Europe.

Prague, however, was the actual epicenter of it all, it was the seat of the Holy Roman Empire itself for centuries. At first, I thought I knew very little about Czech culture, but as I wrote up a short list of world-renowned artists I have known forever who came from here: Franz Kafka (writer), Alfonse Mucha (visual artist), and Bedrich Smetana (composer), I realized that I am more familiar than I’d thought.

A highlight of the entire trip happened tonight: hearing my childhood favorite, “The Moldau,” played at a strings concert in one of the synagogues here that have been turned into museums. I figure it is a pretty good use for them, given that they are still standing, although lack many actual congregants. That concert was followed by some excellent buskers singing and playing guitar in the main square, in the rain no less. The shop windows feature “Bohemian” crystal items, in addition to the hand-painted handicrafts you find in the rest of Eastern Europe, causing prisms of light to shine through the windows.

There’s one big drawback here, and I wonder why it is not a more well-known secret; the wifi sucks. As a person who is more wifi-based than phone-based for my data both at home and abroad, it is beyond frustrating to deal with weak bandwidth. Even at some of Starbucks stores, which serve as havens for strong wifi and a clean bathroom, if not coffee, had people, heads down, trying to get internet, pretending to look at their phones instead of really looking at their phones. Also, in terms of language capabilities, knowledgeability, and cheerfulness, Prague merchants tended to be so jaded that they either don’t care anymore, or have not yet arrived at the definition of excellence in customer service expectations.

Still, what more can you ask for than a city with: a famous river, a famous bridge, a nearby infamous concentration camp, a dedication no access to the arts, a castle, a well-preserved Jewish quarter, good food, beautiful buildings, nice places to stay, and a brimming program of performances day and night…it sounds like I answered my own question, haven’t I? It’s these elements which make Prague so popular to visit.