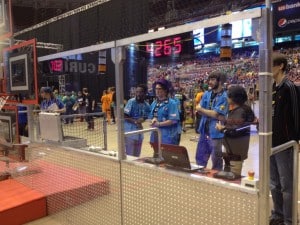 Culver City High School Robotics (known as the Bagel Bytes)  is a team of students and professionals who work together to build a robot for the FIRST (For Inspiration and Recognition of Science and Technology) Robotics Competition. The competition season is six weeks starting in January when they build and test a robot to compete in FIRST Regional Competitions against teams from across California. Winning a regional competition qualifies them to compete in the FIRST Championship Event held in St Louis.

This is where you come in – The Team needs to do some fundraising in a big hurry, as they are now going to St. Louis for the National Championship          (which was not something they had planned for, so…)

Team 702 was originally founded by a local bagel company, and they would give out free bagels at competition and thus the name “Bagel Bytes” was born.

“We are trying to raise enough money to send 14 students to St Louis. If you can help out with a donation, go to www.planet702.org you may use the link in the upper right corner saying “Make a donation.”

If you can give $200 or more, you will get you name on the robot. Really, it doesn’t get cooler than that. And who are you going to hire to maintain your drones? Local talent, right? Give the Bagel Bytes a boost and make a donation.