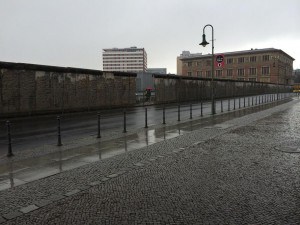 After my Hungarian rhapsodizing (Budapest), I’ve just spent three days in Berlin. Not to call them “B” cities, but, Budapest may be the capital city of Hungary, Brussels may even be the seat of the EU, and Barcelona may just be delightful, but then you have your major metropolises, like Berlin. I’ve often asked myself where I’d want to live in Europe. There are many cities here I love visiting, but I never felt like I’d live in them, because of language, cultural or geographical barriers. I do love a big city, though, and realized the moment I landed that perhaps I’ll say “Berlin” next time I’m asked.

I never would have said that when I visited last, in 1990, a year after The Wall had come down. During most of the lives of people my age and older, Berlin was not only – as they call it here – the “front line” of The Cold War, but it was, of course, the capital of Nazi Germany right before that. Whether one would take up residence here or not, the constant tripping over historical landmarks is what makes it so darn interesting here. As you walk around the city, buildings, structures, and even empty spaces are marked with signs, in German and English, about what happened here. The city is an archaeological layering of modern history. There are remnants of the oldest habitation here, yet not as old as the Holy Roman Empire towns of other parts of Germany. An old church here, a Rathaus there, or a “Judenstrasse” like practically every other city in Germany can be found, but the more impressive sites here are the grand structures built specifically with awareness of Berlin as the capital of Deutschland.

Yesterday, as I walked back to my hotel, I passed the facade of what looked to have been a huge 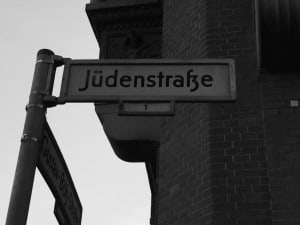 structure, surrounded by nothing, right in the middle of an otherwise bustling part of town. I looked it up later to find that it was the remains of the Anhalter Bahnhof, one of the main train stations of Berlin, infamous as an exit point for Jews “to the east.” Wikipedia gives a good run down of the history of the place, which I read during dinner at a local restaurant that paid homage to the old station with photographs and found artifacts. You feel sad for a moment; “why destroy such a beautiful structure?” until you remember what Germany did to earn the Allied bombings of Berlin, and the occupying and subsequent bisecting of its capital. On the other hand, Germany, at least Berlin, has done such a meticulous job of reckoning and redemption, that I actually do believe the behavior caused by nationalism and totalitarianism could never happen again, here.

I’ve been to Germany countless times, and my first trip was in 1973. My father, son of two Polish Jews who left Poland prior to WWII, was a Germanophile, for whatever reason. He studied German, listened to the German hour on the radio Sunday mornings, and eventually ended up traveling here for (computer) business in the early 1970’s. He schlepped my mother, sister and I here during the summer of 1973, and then in the 11th grade, I began my own study of German for four years. German has come in handy for me a couple of times in my life. First, German somehow counted for my undergraduate Science requirement, as well as for my Linguistics major. Second, it has been pretty useful when it comes to my Holocaust studies.

Speaking of the Holocaust, this Eastern European trip, for me, is wrapped up in the question around Jewish life in these countries, past, present and maybe future. My goal for Berlin was to walk around and see what had changed since 1990. What I encountered was a whole-hearted effort, on virtually every block of the city, to acknowledge the existence of prior Jewish life. Monuments and memorials, plaques and posters, edifices and edifying edicts reveal the widespread (not just ghetto-ized) presence of Jewish history and culture that pervades Berlin, not to mention Germany itself. Ironically, I was about to skip a visit to the Jüdisches Museum; it bothered me to support Hitler’s expressed goal of wiping out the Jewish people so completely that they would only exist in a museum as an example of an extinct race. Glad I overcame my objection; the museum was one of the best history museums I’ve ever seen. In a sentence, it was: interactive, artistic, and comprehensive in its content. Mind you, it is neither a Holocaust museum nor a “history of the Jewish people” museum. It is a museum about the history of Jews in Germany, specifically.

Just to give an idea to a general audience about what Jews are up against even today: the museum proactively asks it’s patrons, “”what do you think is missing?” Both at the site and on Trip Advisor, I have seen people post “Israeli occupation.” It is so sad that a museum dedicated to mutual understanding would be denigrated by the ignorance of people equating the rich yet tragic history of Jews in Germany with an entirely unrelated time, place and people. Any discussion of Israel today at a museum of Jewish history in Germany is as much of a non-sequitur as if somebody had written “British Empire.” Please understand that anti-Semitism today persists with this kind of scary ignorance.

As I write this, I am on the Berlin-Warsaw Express. I originally planned to stop in my maternal great-grandmother’s (Sala Zunger-Zekind) birthplace: Konin, which is on the way. I decided, after all, not to stop in a place that is and has been “”Judenrein” (free of Jews) since the Nazis, and of my own family for at least fifty years prior to that. Instead, I’ll just enjoy looking out at the well-traversed – from Napoleon to my ancestors to Nazis – countryside. Next stop: Warsaw, then Krakow.