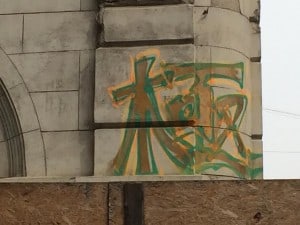 Tucked in the Folds of the Iron Curtain

Budapest has been on my destination hit list for a long, long time. I stayed pretty close to home last spring break for the first time in over ten years, so when I saw I had enough miles for a ticket to Europe, I decided to knock off two more of my top ten most wanted cities this year: Budapest and Prague. My travel companion agreed. So I booked departure for Budapest as soon as the clock began to tick on Spring Break, and out of Prague in order to arrive the last day of vacation.

I’ll get to Prague when I get there but, why Budapest? Although many of my Facebook following friends have come forward with likes on my photos and revelations of their Hungarian roots, I have no familial ties to Hungary at all. True, my paternal grandfather was a “citizen of the Austro-Hungarian empire” for a minute, but Jews were ethnically Jews, so it mattered more what town in Eastern Europe your ancestors had settled in, after all the anti-Jewish edicts restricting where a Jew could live were lifted. We all have four distinct branches of family, and, my paternal grandfather’s town was Jaroslaw, Austro-Hungary. He was born around what we used to call “the turn of the century” until our recently turned century made the term ambiguous.

So, I realized after I’d arrived, I kind of had an ancestral claim to the city, but, not really. I just wanted to travel there because I grew up hearing about Budapest, have friends who have gone before and raved about it, and I had always enjoyed the Hungarian food on the upper east side in New York. Most importantly, I am a city girl, and I like ticking off having been to “important” cities; I considered Budapest to be one of them, and, now after the trip, I still do. The word I’d use for Budapest is “sophisticated.” I’ve always found Hungarians to be relatively sophisticated; even Jewish Hungarians have always seemed more “classy” to me than the rest of us; they tried to be anyway, insisting on speaking Hungarian instead of Yiddish. They always seemed more assimilated than the rest of us Ashkenazic Jews.

What makes Budapest sophisticated? Let me drag out my trusty sophistication monitor – the one I 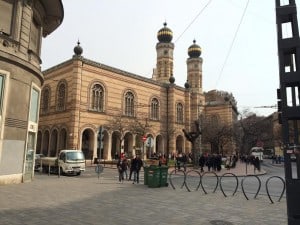 thought up this morning on my morning walk up Andrassy Boulevard, from the Opera House to the statue of Arpad. First of all, the city has tons of theaters, which is a sure sign of a sophisticated culture, which Los Angeles is finally approaching. On the Buda side of the Danube, they have a theatre where Beethoven himself gave a concert in 1800. Next, a city needs to have museums. Excellent museums say that a place has a significant enough story to tell, has been bestowed with benefactors who care about it, and politicians who support such endeavors. The museums here are housed in massive architectural edifices, and one can scarcely get around to them all. There are art museums, historical museums, more art museums, folklore museums on top of folk museums, and the churches and synagogues that are tourist attractions themselves. The so-called Dohany Synagogue is the largest synagogue left in Europe, and is apparently second in size only to Temple Emmanuel on 5th Avenue in Manhattan.

This brings me onto another one of my “sophistication” litmus tests: the presence of Jews in a city. No matter which way you slice it, Budapest has been a Jewish city since Jews were allowed to live in metropolises like Budapest, and continued to be so not only through World War II (the story of the sell-out murder of 400,000 Hungarian Jews in the last days of the Holocaust is for another article sometime), but to this day. Among European capitals, western central and eastern, Budapest stands out as still having a vibrant, albeit relatively assimilated, Jewish community, and this, my readers, is another parameter because: Jewish people tend to appreciate and/or support the arts. In a very white part of the world, Jews have always (and to this day) play the role of “the other” in Europe. A society that “tolerates” (the new politically correct term being “accepts”) others marks a cosmopolitan one. A similar parameter of sophistication is not just toleration, but the adulation of intelligentsia, highlighted by the presence of selective universities and tons of bookstores. Especially used (antiquarian) bookstores is evidence that people not only read, but collect, books. I not only found a book or two that I would not have found otherwise, and would have cost me double on Amazon, but even the new bookstores had massive English-language sections that prominently featured titles I might never have encountered.

Budapest was immaculately clean, and green. The toilet paper at the hotel had been recycled from cartons (one doesn’t just want to say “recycled toilet paper”). Transportation was accessible everywhere, easy to understand, and – most significantly – Budapest is yet another city that has those nice municipal bicycles to rent-and-drop (you do it with a credit card), along with clearly marked bike paths everywhere. If there was graffiti, it was often artistic; I even noticed graffiti in kanji.

Finally, there are significant historical and cultural elements in Budapest. Namely, it is situated on the Danube, one of European most storied rivers. It’s desirability caused it to be “stolen” by Mongols, Turks, Austrians, Nazis and Communists, not always pleasant, but providing a rich cultural quilt, and a language that is neither Latin, Germanic nor Slavic, but rather, classified as a “Finno-Ugric” language, and is therefore linguistically unique (as is Japanese and Korean) and possibly a throwback to Genghis Khan days. New Budapest is innovative as well; it crafted the concept of “Ruin Bars.” Hollywood discovered it years ago as a location for looking like a quintessential Eastern European city, which it does. Next stop, twenty-five years later: Berlin.