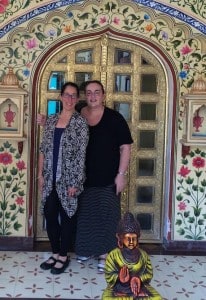 This is the third and final installment of my India series, for now. I’m not declaring myself an India expert; all I did was spend a week there. I am just so glad that I did take the opportunity to set foot in India at least once, if only to see if I’d want to go back again someday. I know now that India will not be a mere check off: another notch on my expanding belt of bucket list places around the world. When you’ve been to India, you’ve advanced to a higher level in the travel and tourism game.

I’ve been traveling internationally since 1973 (that’s 42 years) and it was getting embarrassing to not have gone to India when I appreciate so much about the culture. I departed knowing I’d enjoy the cuisine; not a breakfast, lunch or dinner passed without partaking of Indian fare. I arrived there with a case of heartburn from something I’d eaten before leaving, and I was experiencing pains when I swallowed food on the plane. After arrival, voila, the heartburn was gone the next day. I’m convinced those spices have medicinal purposes. The tastes were varied, and never too hot or too mild. Not like when you go to Indian places here and are allowed to dictate the level of spiciness to the chef, for heaven’s sake. I tried as many different items as I could, and not once was anything “too spicy.”

The last leg of our trip was to Kolkata. Truth be told, after the wedding, Taj Mahal and Jaipur, I would have used my last couple of days in Bombay. Bombay as an Indian destination seems as essential as Los Angeles to a US itinerary, and not just because of the Hollywood-Bollywood connection. But, when you are as lucky as I am to have a travel companion who is not only flexible with dates and destinations, but is THE most knowledgeable about booking hotels (with 40K Trip Advisor followers!) and she says she wants to go to Kolkata for a change, you go to Kolkata “for a change.”

But the question, “why Calcutta?” persisted. Growing up in America, the word “Calcutta” bespoke poverty. Just as the word “Taj Mahal” has become a metaphor for opulence, “Calcutta” was synonymous with “slum.” But I did not have that impression at all. There are clean sidewalks, tons of colonial era architecture to behold, tree-lined streets, and a huge park on the river. Significantly, Kolkata is Mother Teresa’s city, which may have contributed to its reputation as needing such benevolence, but might also have benefitted from her work.

Growing up in the 1960’s and 70’s, our music scene was dominated by The Beatles. Their trip to India influenced us all. They began to inform the world about matters in the region through the voice of music. We, the “Mad Men” generation, cite that our introduction to modern-day India started with The Beatles. The hippie epicenter of Berkeley, even today, is still peppered with stores selling Indian clothing and cuisine. We finally tasted a bit of Indian city life in Kolkata. We wanted to try the food.

Kolkata, the former seat of the British East India Company (and subsequently Empire) in India, fell into disrepair in the 1960’s and 1970’s due to an influx of refugees from Bangladesh and, at the time, the presence of radical communists. From the roaring 80’s on to the present, however, Calcutta has come, along with other major cities of India, a long way. Today, “downtown” Kolkata – I didn’t really go anywhere else – is a tree-lined, tropical-looking, literary, culinary delight of a town. There are major British-power architecture buildings that are eerily although entirely appropriately in disrepair, each telling a story of the ages as you walk by. Here I go again with being reminded of another place: 1980’s Shanghai. Anyone who knows Shanghai today would laugh and stop reading here, but, I’m saying this: I give Kolkata ten, maybe five, years to become whatever kind of city it wants to become, “cosmopolitan” or not. The infrastructure is already in place for it, what with construction going on all over the place, city-provided wifi (albeit with “anti-terrorist” restrictions in place for its use), well-marked roads, nice shopping malls and markets, and all sorts of transportation available.

I liked being able to cross in crosswalks that often had non-operational light signals. There was no such thing as jaywalking; if you CAN cross, you do cross! Same with cars; at one point our taxi eased into the space left between lines of cars between two lanes; why not do so if you can; you might get where you are going faster.

After Kolkata, my odyssey continued on to Tokyo, where I had a precious if ill-prepared five hour layover. I worried that contacting any friends might have been an imposition, so, while Facebooking a photo of the nice Toto “washlet” that greeted me, I enjoyed a quintessential Narita airport mall experience. My “new” passport, issued in 2012, did not yet have a Japan stamp yet – every other passport I’ve ever had since the age of 18 HAS had a Japan stamp – so I was thrilled that the airline (and the Japanese government) tolerated me stepping out of the immigration and customs areas, and then right back through a few hours later. I spent some of the yen I had found in my travel wallet. That goes on record as my shortest stay in Tokyo, to complement living there for nearly a decade.

One of the coolest things I noticed on this trip was when I went to the international clock app on my iPad before attempting to FaceTime my boys at home to find that Delhi and Kolkata were exactly 3.5 hours behind Tokyo and exactly 3.5 hours ahead of Jerusalem, two cities I consider “home.” Seriously, what’s not to like about India?