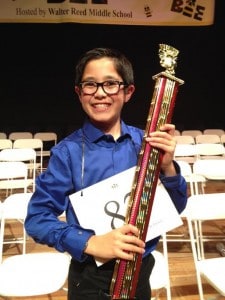 The road to the Scripps title is different from the CCUSD event, which is for fourth-, fifth- and sixth-graders, while the Scripps National Spelling Bee is open to those 15 and under and in eighth-grade or lower.

Cooper finished first in the Los Angeles County Scripps Regional Spelling Bee on February 8 at Walter Reed Middle School in North Hollywood and will represent the county at the Scripps National Spelling Bee, the nation’s largest and longest running educational program. The competition is administered on a not-for-profit basis by Scripps in Cincinnati and each year, involves more than 11 million spellers, all of whom begin at the local level.

The grueling six-hour regional event ended when Cooper correctly spelled the word “carillon” – a musical instrument found in churches and universities, comprised of at least 23 bells arranged chromatically and tuned harmonically so that they can be played together from a keyboard.

Cooper went 13 rounds, correctly spelling each word thrown his way to defeat 102 other spellers from throughout Los Angeles County. More than 23,000 spellers competed to reach the Los Angeles County Regional event, but only the winner, Cooper, will advance to the Scripps National Spelling Bee to be held May 24-29 in Washington, D.C.

“I worked really hard to get to Washington D.C., and I’m going to enjoy every minute of it!” said Cooper.

Last year, he became a two-time winner of the CCUSD Spelling Bee. As a seventh-grader, he was ineligible for this year’s bee. The CCUSD Spelling Bee is for students in fourth- through sixth-grade. But that didn’t keep him from showing up to support his fellow spellers and get in some extra practice.

“I missed one,” he admitted afterward. But here’s hoping he spells them all correctly on his quest for a national title.

The live oral (televised) rounds of the Scripps National Spelling Bee will be broadcast as follows: