Editor’s Note – We are pleased to present two 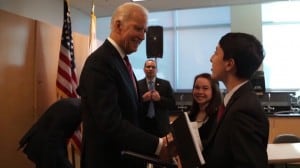 On January 23rd Lena, my fellow KidScoop Media reporter, and I covered Vice President Joe Biden’s visit to West L.A. College to highlight the administration’s proposal to make the first two years of community college free, and to allow a few community colleges to offer select four-year degrees. After receiving our press passes we went through secret service screening, waited about ten minutes, were walked to the press holding room, and then moved to the area were the actual event was to take place.
We waited there for a little under an hour and a half, while Mr. Biden was shown the dental hygiene lab within the college. A four-year degree in dental hygiene is one of the new degrees that WLAC is going to be able to offer under the proposed program. When the Vice President walked in, Lena and I were situated near the doorway he entered, and he stopped on his way through to offer us an interview after his remarks had taken place. Of course, we agreed (quite eagerly), and listened to his remarks for about half an hour. During this speech, he really pushed the “America is number one” narrative, and pointed to the recent economic upswing, and drop in gas prices as proof that America is “entering an economic Renaissance,” and that “we [currently] have a gigantic advantage… in this country.” He expounded on the point that America’s next generation of workers had to be prepared for the new jobs created, and how the people already in the workforce are updating their knowledge to fit new advances. To support this point he cited the average age of community college students, 25-29 years of age. “However,” he said, “any country that out-educates us, out-competes us.”
He rounded up his speech with the importance of education, at which point the press was led out, and he spoke privately in a round-table discussion with a group that included many of the college’s senior officials, Culver City’s Mayor Meghan Sahli-Wells, and some of the dental hygiene lab students who conducted his tour. We waited outside the doorway for about 45 minutes, then were allowed to come in. Mr. Biden had only offered to give an interview to us so and Lena and I were the only the journalists who got to ask him questions. That is something that had never had happened to me before.
I asked, “Everyone says we don’t have enough money to offer better education or infrastructure, but we spend hundreds of billions of dollars on the military, at least some percentage of it on useless, leftover bases from the Cold War. Is this going to change? If so, when?” He redirected my attention to the tax-breaks for the rich, and pointed to how much money we could be making if those tax-breaks weren’t there. Lena asked if his background and upbringing affected the his support for education, and Mr. Biden answered with a story about how much his dad really wanted him to go to college and get a higher education. Another story he provided was about how, when both the Obama and Biden families were preparing to speak to a rally, someone (he didn’t remember who) had said, “You know, none of us would be here today without someone helping us to get our education.” He concluded with, “It’s my dream to make sure every kid can get the education I got.” After our interview, the KSM contingent left the building and traveled home. A nice final touch was the fact that we saw his motorcade passing by as we waited our turn to exit the parking lot.

A College Experience By Lena Klein

Not everyone is fortunate enough to go to college. Vice President Joe Biden recently visited West Los Angeles College to talk about his efforts to increase the number of people who go to college. I got the opportunity to interview him about his ideas. Most people haven’t met the Vice President, so let me tell you what it was like.

I carpooled with the other KidScoop Media reporter, Sam Parekh. KidScoop Media is the organization that set up the interview with Vice President Biden. When we arrived at West LA College, a secret service officer with an assault riffle stopped us at the entrance. Then in the parking lot we were interviewed by a TV reporter from KCAL while her cameraman recorded us. She had us tell her the questions we were going to ask Vice President Biden.

When we got to the building where the event was being held, we waited with the other press in a large group until a secret service agent told us to follow her to security. We put down our things as two other agents checked our bags. Then I walked over to where some agents told me to hold out my arms as they scanned our bodies with metal detecting wands (we got “wanded”) .

Next, we followed another agent to a regular student classroom with all the other press. It was incredible to stand and talk to the actual reporters for all different types of stations. Before we entered the room where Vice President Biden would be speaking, the agent told us not to shove our neighbors or push one another. I didn’t know what to be: excited to see the Vice President, or scared that I was going to be pushed!

The press pool (reporters assigned to follow the Vice President that day) headed off while the rest of us were brought into the room where he would be speaking, which was a dental lab. We waited for about half an hour before Vice President Biden entered and walked straight to Sam and me. He put his hands on my face and asked me my name, age, and if I was planning to go to college. He asked us if we wanted an interview. We both replied yes.

His speech was inspiring, and I hope everyone gets the chance to hear it. It was about his proposal to make community colleges free. When the speech ended, the press left and I went into the hallway surrounded by secret service agents. We waited again for about half an hour for Mr. Biden to finish telling personal stories to some people in the dental lab. One of those people I’m proud to say was Meghan Sahli-Wells, the Mayor of Culver City!

One of the agents came over and told us about his background as a military aide, and then being hired by Vice President Biden. He told us what an honor it was working for such a great man.

I shook his hand and thanked him. We exited the building and did a short video segment for KidScoop Media about what just happened. I considered myself the luckiest person to get the opportunity to actually meet and interview the Vice President of the United States. This experience was outstanding, and I’m so glad I could share it with all of you.