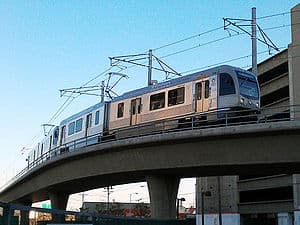 By next year LA Metro will have Light Rail service running on the Expo Line from Culver City to Santa Monica and on the Gold Line from east Pasadena to Azusa. By 2019 the Crenshaw Line should be running between LAX and the Expo Line. The Regional Connector subway extending the Blue Line from 7th and Flower to Azusa and the Expo Line to East Los Angeles is scheduled to be finished by 2020.The Purple Line subway on Wilshire Blivd is expected to reach La Cienega in Beverly Hills by 2023. So what new projects can we expect to be building in the next 10 years or so?

The only project so far that has firm plans is the extension of the Purple Line west of La Cienega. The Purple Line is expected to reach Century City by 2026 and Westwood by 2035. The next new project with the highest priority is the East San Fernando Valley Transit Corridor. This would run roughly north-south on Van Nuys Blvd from Ventura Blvd serving the Orange Busway Line and turning northwest on San Fernando Road ending at the Metrolink Sylmar/San Fernando Station. This line would connect in the future at Ventura Blvd with future service to West Los Angeles.This route is about 11 miles from Ventura Blvd to Metrolink Sylmar/San Fernando. What is unresolved is should this be a Busway or Light Rail and should the line stop at the Orange Line at first and be extended to Ventura Blvd as money becomes available. This project is mandated by Measure R passed in November 2008 which raised the County’s Sales Tax a half cent for transportation in Los Angeles County. From Measure R, $170 million dollars has been reserved for this project. But $170 million isn’t enough for a Busway, let alone Light Rail. In the San Fernando Valley there is increased demand for more rail transit service. There is no firm date when this project will be running. It was suppose to be running in 2018, but that won’t happen if Light Rail is chosen.

There are several Measure R rail transit funded projects that are not planned before 2035. These include extending what is currently the Gold Line (it will become part of the Expo Line with the Regional Connector) east of East Los Angles to either Whittier of El Monte.There are also plans to build a service over the Sepulveda Pass along the I-405 between the San Fernando Valley and West Los Angeles. Also there are plans to extend the Green Line south from Redondo Beach to Torrance. Again these are not planned to be built before 2035.

There are 2 Measure R projects planned by 2024. One is the Airport Metro Connector. This is the LAX People Mover connection to the shared tracks and stations of the Green Line and under construction Crenshaw Line. A station will be built at 96 street and Aviation Blvd to connect with the People Mover for connections to LAX’s terminals.

The other Measure R project planned by 2024 is on the 20 mile West Santa Ana Branch Corridor. This is a now publicly owned former Pacific Electric Right of way is between Santa Ana and Paramount. Planning for this by the Southern California Association of Governments (SCAG) recommended a service from Santa Ana to Los Angeles Union Station using this right of way , then turning north at Paramount on a now publicly owned former UP Harbor Line. SCAG estimated that this service would generate ridership of 80,000 daily which would be one of the busiest Light Rail services in Southern California. Such ridership would be too great to be carried by a Busway service.

So far no firm decision has been made for the technology or even the final route. Most of the attention of LA Metro seems to be on construction between Santa Ana and Paramount. There is no discussion so far how or where this service would connect the nearby Green Line to LAX or connect to downtown Los Angeles. One solution for this would be to use the former UP Harbor Line. Light Rail from Santa Ana can connect at Paramount to the old UP and go a short distance to where it runs under the Green Line and 105 Freeway. A new Green Line Station could be built for transfers between the Green Line and West Santa Ana Branch trains between Garfield Ave and Paramount Blvd. It would also be possible to upgrade the existing former UP tracks to create a new Metrolink service between Union Station and Long Beach. This could share right of way and a station for connections to the Green Line. While not cheap, this could be built faster and for less money than extending Light Rail from Paramount to Union Station.

Whatever is done, more money will be needed in the future if more rail projects are built. In 2012, Measure J was placed on the ballot in Los Angeles County. It would have extended the Half cent sales tax for Measure R from 2039 until 2069. This would have been used to borrow money to speed up construction of projects now while saving money from future inflation and take advantage of low interest rates now available. This measure failed to pass gaining 66.1 percent of the 66.7 percent needed to pass. What seems to have prevented the bill from passing was the perception by some regions of Los Angeles County that they wouldn’t get their fair share of the money while other parts of the County would get too much. Much of this was because of the high cost of extending the Purple Line to Westwood. Had Measure J passed, some of the money would have allowed finishing the Purple Line to Westwood by 2013 instead of 2035.

It seems likely that Los Angeles will see another ballot measure to increase funding for Transportation in 2016. If political compromises can be made to the satisfaction of enough groups, such a measure will have a good chance of passage.