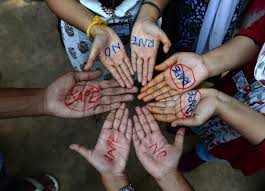 After the story of the 2013 rape on the high school campus came out yesterday, it’s been everywhere. While this is bad news, this is good news.

Rape has been all over the news for much of last year – Woody Allen accused of raping his stepdaughter Dylan Farrow, the charges against Bill Cosby regarding decades of drugging women and then raping them, even the Rolling Stone’s story of campus rape cited a crime committed in 2012. Rape is old news.

But at last, we are getting into a possibility of public dialogue that can effectively change the rape culture we all live in. Women are coming forward to admit to being victimized, and to celebrate surviving. Stories need to be told. Speaking out is good news.

As a survivor, it’s dicey. Every story that I encounter, whether in print or on the air, leaves my stomach awash in nausea that may last for days. But I’m not turning away because this information is vital. I read and I listen and every story reminds me that we do not have to continue suffering.

The lawsuit now pending against CCUSD for negligence seems to me misguided on a number of levels. My reading of the police report shows that the perpetrator was prosecuted (which is rare) and convicted (even more rare) and is currently under probation.

As Helen Benedict, a professor of journalism at Columbia University has noted, many people simply don’t understand how horrible rape is; “It’s not like unpleasant sex, it’s like being murdered.”

Seeking out still more redress in the form of a civil suit is not asking for justice, it’s asking for compensation as a form of revenge. But it also keeps the pain alive by going back for another battle, one that can’t undo the damage or help with the healing. I’m personally more than a bit horrified at the adults who seem to be hoisting this young woman like the proverbial bloody shirt. Our very young and deeply injured survivor needs better advice and more time to recover, not another round in the ring.

Alice Sebold’s memoir of being raped and beaten as a college freshman is titled “Lucky.” When she went to the police she was told that her assailant was known for murdering his victims after raping them and that she should consider herself lucky. It did not feel like luck to her. But Sebold’s hard earned wisdom from surviving rape is that “You save yourself or you remain unsaved.”

In a world that still blames women for being attacked, raising your hand to say “Yes, that happened to me” is putting yourself at risk yet again. You will be blamed, doubted, mocked and accused. Every story I hear pours me a fresh cup of grief and rage that this ever happens to anyone. But no amount of money can buy justice.

Because there is no justice, there’s just us.

They way we choose to treat each other, how we respond to injury and anger, how we carry ourselves through a crisis, that is what matters. It requires survivors to have courage, and patience, and perspective – all of which can be instantly lost when you are that hurt.

Women need to tell their stories, but no one should be forced into the spotlight in hopes of a payoff.

Rape is heinous. But admitting that it happens is helpful. We can’t can resolve a problem until we admit that it exists.