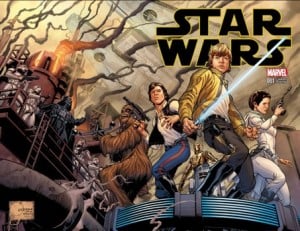 2015 is a big year for Star Wars, not only will the first new movie since “Revenge of the Sith” be released in December with “The Force Awakens,” but the Star Wars Universe returns to its original comic book home at Marvel Comics. On January 14, 2015, Marvel is kicking off an all-new era of greatness for Star Wars comics with the release of an all-new “Star Wars” #1.

To celebrate this momentous occasion, The Comic Bug is giving away “Star Wars” #1 to anyone who drops by their Manhattan Beach or Culver City comic shops dressed as their favorite “Star Wars” character. All you need to do to get a free “Star Wars” comic is put on that Ewok costume hanging in your closet and get to The Comic Bug on Wednesday January 14 between 5 p.m. and 8 p.m. and you walk away with “Star Wars” #1 by writer Jason Aaron and artist John Cassaday.

Mike Wellman, Co-Owner of The Comic Bug offered “I read the preview copy Marvel sent out, and I don’t exaggerate when I say that you can literally hear the crash of John Williams score when you pop the book open. The team of Aaron and Cassaday have captured the vibe and fun of the original Star Wars films better than any comic before it. Maybe even better than any adaptation in any medium period!”

The free comic giveaway is a part of The Comic Bug’s Star Wars Premiere Party which will include “Star Wars” styled pastries from justJENN Recipes. Her “Star Wars” designs got her an invite to Skywalker Ranch home of Lucasfilm and her bakery designs are regularly featured on Nerdist.com.

The Comic Bug has ordered well over 1,000 copies of “Star Wars” #1 so there will be plenty for the fans who show up dressed like Jedi, Jawas, Stormtroopers, and Wookies. There are a variety of different covers – over 80 at last count – some are specific to certain stores and some will be available everywhere. The Comic Bug will have a variety of these covers available for purchase as well.