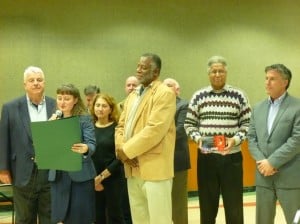 While the location was different – The Rotunda Room at the Vets Building rather than the Mike Balkman Council Chambers at City Hall – the first meeting of the Culver City Council for 2015 touched some familiar agenda points; counting the homeless, celebrating MLK weekend, and contracting the producer for the Summer Music Series.

City Hall will be unavailable for meetings for the next few months owing to an upgrade on the audio and broadcast system used in the chambers. Work is expected to be finished in late March. Until then, the council will be meeting at the Rotunda Room on their usual schedule, every other Monday.

Proceeding with the agenda, the council voted to create a new business district, Washington West, to reach from Inglewood Boulevard to Beethoven Street along Washington Boulevard to help promote business along the street.

The next item, discussion of the 2015 Summer music series, covered a bit of history and quite a bit of ground. When the council voted in June of 2014 to delay putting out a Request for Proposals (RFP) until the much-looked-for development at Parcel B downtown would be ready as a venue. This left Gary Mandell, the long time series producer, in position to continue. With money now available from the Cultural Affairs Foundation, Mandell put forth a contract for $39,662 as his price for producing.

When the money that had been funding the concerts, from the Redevelopment Agency, had stopped in 2012 city support had dropped to approximately $17,000. As producer, Mandell made up the difference by getting sponsors for the shows, raising another $11,000.

Mandell spoke from the podium, noting the current level of city funding available saying “I thought we would revert back to the way it had been.”

Requesting that the city pay the full amount for the series, Mandell’s contract offer stated that he would seek out sponsors so that the city could be recompensated for the expenses. There was also another $2000 per sponsor fee, payable to the producer, for getting the sponsor to sign on to the series.

When Council member Andy Weissman asked if he’d “anticipate a lessening of enthusiasm ” among the previous sponsors, Mandell replied “If people don’t continue, [the music series] will surely end. ” Mandell also emphasized the responsibility of his roll as producer, citing injuries and felony arrests at other concerts held during the summer in the area as a grave concern.

Weissman pointedly asked ” So, we will be paying you more money to get our money back?” To which Mandell replied ” Yes.”

While both Mayor Sahli-Wells and Council member Mehaul O’Leary thanked Mandell for his long commitment to the project, they offered no objection to agreeing to the contract.

Council member Cooper was also laudatory but blunt, saying “I think you ‘re doing a great job, but unless I have this wrong, it doesn’t look like you’re going to be working very hard to get sponsors.”

Mandell reminded the council that they had a long relationship built on trust, and added “Take my word.”

The item was passed, five ayes.

Tevis Barnes, the city ‘s Housing Administrator gave the city staff report in regard to authorizing the annual Homeless Count to be scheduled this month. The council authorized staff to solicit volunteers and donations to assist with the task.