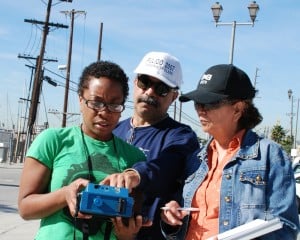 In a new issue brief, Community Health Councils (chc-inc.org) found low-income communities of color in the City of Los Angeles have fewer protections from the risks from local oil drilling operations than more affluent, whiter neighborhoods. This includes allowing drilling activities hundreds of feet closer to residences, fewer protective features like air monitoring or enclosed operations, and oil operations that have received many more regulatory violations and community complaints.

The City of Los Angeles is home to 5,000 active oil and gas wells spread across approximately 70 different sites embedded in neighborhoods, parks, and commercial districts. In fact, a recent Natural Resources Defense Council report found 1 in 3 LA County residents lives within one mile of an oil drilling site and many live and study right next to active sites. The more than half a million Los Angeles County residents who live within a quarter-mile of a drill site face direct threats to their health and quality of life from noisy operations, truck traffic, dangerous air pollution, and the use of large amounts of toxic chemicals. Oil drilling and extraction is a hazard throughout the city, and, according to recent report by Department of City Planning outdated city regulations fail to address the needs of communities, particularly in low-income areas. Companies drilling in densely populated neighborhoods have not comprehensively evaluated the health and environmental risks, are typically not required to notify residents, infrequently monitor toxic air emissions, handle large amounts dangerous chemicals, and do not publicly disclose monitoring results or report incidents.

Many sites in Los Angeles, particularly in lower-income areas, have few protections in place to protect community members from oil production risks. Oil drilling in wealthier, whiter neighborhoods is either at least 400 feet farther away from homes than South LA and Wilmington-area sites or the operations near homes are partially or completely enclosed. When Zoning Administrators determined the terms of drilling in affluent communities, they noted oil drilling was an activity more suited for industrial zones, and only allowed drilling in Wilshire and West LA areas after a strict set of precautionary measures were enacted.

“Looking at the data, Community Health Councils has found that past city decisions have failed to protect low-income communities of color in Los Angeles from the risks of oil drilling. As a city, we need to stand together to make sure the health of all communities is fully protected.” says Malcolm Carson, Community Health Councils’ General Counsel and Policy Director.

The City of Los Angeles has two immediate opportunities to begin addressing this historic and continuing wrong. First, the Planning Department is reviewing a request to drill and re-drill three wells on Jefferson Boulevard in the West Adams neighborhood. Oil operations at this site have never undergone an environmental review despite being only 60 feet from homes in a densely populated neighborhood. The City Attorney’s office and Zoning Administrator will decide whether to grant the community’s request for informed decision-making by requiring a full environmental review before drilling wells in residents’ backyards. Second, the City Council directed the Department of City Planning to prepare a motion halting well stimulation activities like hydraulic fracturing and acidization until those activities were studied and proven safe. Instead, the City Council will soon hear and react to the Department’s report recommending the city update oil regulations, rather than freeze well stimulation activities.

“At the Jefferson Drill Site the City allowed the oil company to sell the vacant buffer properties to housing developers with the stipulation that they would continue to serve as buffers and that the tenants would have no right to complain about noxious fumes, noise, and other detrimental impacts to their health. How did the Planning Department come to see residents serving as buffers, rather than buffers serving residents?” says Richard Parks, President of Redeemer Community Partnership and a concerned community member. “In granting exemptions, loosening conditions, waiving public hearing requirements, and permitting the sale of buffer properties the City is showing a reckless disregard for low-income residents’ health and safety. The case before the Zoning Administrator for the Jefferson Site is an opportunity to right decades of injustice.”

With hundreds of thousands of people living near oil drilling facilities that are inadequately regulated, especially in low-income communities of color, the City of Los Angeles has an imperative to conduct a thorough assessment to determine the degree to which residents are at risk from current oil operations and to identify measures all communities need to ensure their health and welfare is protected. Allowing oil production without protecting impacted communities is indefensible.