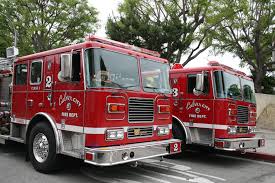 The Culver City Fire Department has once again been awarded a Class 1 rating by the Insurance Services Office (ISO). The Culver City Fire Department is part of an elite group
of 60 ISO surveyed communities out of 48,000 in the United States to achieve a Class 1 ISO rating. There are currently just seven Class 1 agencies in California. The Culver City Fire Department achieved its first Class 1 rating in February 1995.
The Class 1 designation is the highest possible rating that can be given to any fire department in the United States. ISO is a nationwide rating service used by insurance companies to help establish insurance rates for local business and residential properties. According to ISO data, a community’s investment in firefighting services is a good predictor of future fire losses.

“For 20 years, the Culver City Fire Department has distinguished itself as one of the best
Fire Departments in the entire nation. I am proud, but not in the least surprised, that CCFD
has earned Class 1 status again this year. Their professionalism, compassion, and rigorous training translate into excellent service and a safer community,” said Culver City Mayor Meghan Sahli- Wells.

Fire Chief David White added, “The men and women of the Culver City Fire Department are committed to providing superior fire protection for our residents and businesses.”