How many stars like our Sun host planets like our Earth? NASA’s Kepler Space Telescope continuously monitored more than 150,000 stars beyond our solar system, and to date has offered scientists an assortment of more than 4,000 candidate planets for further study—the 1,000th of which was recently verified.

Using Kepler data, scientists reached this millenary milestone after validating that eight more candidates spotted by the planet-hunting telescope are, in fact, planets. The Kepler team also has added another 554 candidates to the roll of potential planets, six of which are near-Earth-size and orbit in the habitable zone of stars similar to our Sun.

Three of the newly-validated planets are located in their distant suns’ habitable zone, the range of distances from the host star where liquid water might exist on the surface of an orbiting planet. Of the three, two are likely made of rock, like Earth.

“With each new discovery of these small, possibly rocky worlds, our confidence strengthens in the determination of the true frequency of planets like Earth,” said Doug Caldwell, SETI Institute Kepler scientist at NASA’s Ames Research Center at Moffett Field, California. “The day is on the horizon when we’ll know how common temperate, rocky planets like Earth are.” 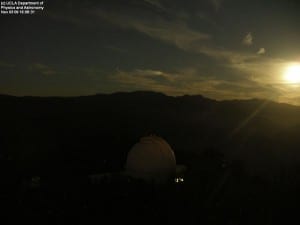 This International Year has been the initiative of a large consortium of scientific bodies together with UNESCO, and will bring together many different stakeholders including scientific societies and unions, educational institutions, technology platforms, non-profit organizations and private sector partners.

In proclaiming an International Year focusing on the topic of light science and its applications, the United Nations has recognized the importance of raising global awareness about how light-based technologies promote sustainable development and provide solutions to global challenges in energy, education, agriculture, and health.

MOUNT WILSON OBSERVATORY LAUNCHES 100-INCH OBSERVING PROGRAM. The historic 100-inch telescope at Mt. Wilson is now available for public observing. You and your friends can now look at the stars and planets through the same telescope used by astronomer Edwin Hubble in the 1920s to measure the expansion of the Universe.

The 100-inch Hooker Telescope, the world’s largest from 1917 to 1949, forever altered our understanding of the nature and size of the Universe and launched a revolution in astronomy that continues through today. This world-heritage class instrument, used by many of the greatest astronomers of the Twentieth Century, is for the first time being made available for regular public viewing. For signup information and other details,