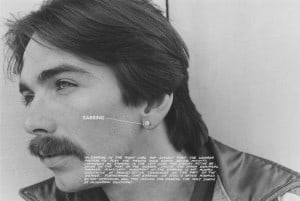 Hal Fischer’s seminal photo series Gay Semiotics was an important milestone in both the conceptual and queer art movements when it was first exhibited in 1977. Fischer’s photo and text works decoded the body language and sartorial ciphers he saw on view in San Francisco’s Castro and Haight-Ashbury neighborhoods. The resulting dryly comic anthropological study presents a section of gay life without sensationalizing, a radical gesture in an era when gay rights were not widely discussed, let alone accepted, by the mainstream. Often shown in an abbreviated format, this is the first time the complete series of 24 photos will be shown together in almost 40 years.

Cherry and Martin is proud to present Hal Fischer’s Gay Semiotics (1977/2014). This is the first time Fischer’s landmark group of photographs has been seen in its entirety in almost forty years.

One of the key artworks associated with 1970s California conceptual photography, Gay Semiotics is marked in particular by Fischer’s insistence on the visual equivalence of word and image. The use of words as pictures—in additional to providing textual content—is one of conceptual photography’s most important contributions to art today and a hallmark of the loose Photography and Language group that included Fischer, Lutz Bacher, Lew Thomas and others working in the San Francisco Bay Area.

Published “at a time when gay people have been forced to both evaluate and defend their lifestyles,” Gay Semiotics is a proactive statement from a voice within the gay community. Fischer’s work goes in the opposite direction of Robert Mapplethorpe; as one Artforum reviewer wrote in 1977, “This is to say Fischer never sensationalizes, and the voyeurism which seems to come so naturally to photography is absent.”

Thirty-seven years later, Gay Semiotics stands as one of the most significant conceptual works coming from the West Coast in the late 1970s; a profound look at the years just after Watergate and before the political assassinations of Harvey Milk and George Moscone, the trauma of Jonestown, the ascendancy of Ronald Reagan,  and the devastation wrought by AIDS.