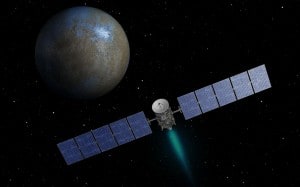 NASA’s Dawn spacecraft has entered an approach phase in which it will continue to close in on Ceres, a Texas-sized dwarf planet never before visited by a spacecraft. Dawn launched in 2007 and is scheduled to enter Ceres orbit in March 2015.

Dawn recently emerged from solar conjunction, in which the spacecraft is on the opposite side of the Sun, limiting communication with antennas on Earth. Now that Dawn can reliably communicate with Earth again, mission controllers have programmed the maneuvers necessary for the next stage of the rendezvous, which they label the Ceres approach phase. Dawn is currently 400,000 miles from Ceres, approaching it at around 450 miles per hour.

The spacecraft’s arrival at Ceres will mark the first time that a spacecraft has ever orbited two solar system targets. Dawn previously explored the protoplanet Vesta for 14 months, from 2011 to 2012, capturing detailed images and data about that body.

“Ceres is almost a complete mystery to us,” said Christopher Russell of UCLA, principal investigator for the Dawn mission. “Ceres, unlike Vesta, has no meteorites linked to it to help reveal its secrets. All we can predict with confidence is that we will be surprised.”

The two planetary bodies are thought to be different in a few important ways. Ceres may have formed later than Vesta, and with a cooler interior. Current evidence suggests that Vesta only retained a small amount of water because it formed earlier, when radioactive material was more abundant, which would have produced more heat. Ceres, in contrast, has a thick ice mantle and may even have an ocean beneath its icy crust.

The spacecraft uses ion propulsion to traverse space far more efficiently than if it used chemical propulsion. In an ion propulsion engine, an electrical charge is applied to xenon gas, and charged metal grids accelerate the xenon particles out of the thruster. These particles push back on the thruster as they exit, creating a reaction force that propels the spacecraft. Dawn has now completed five years of accumulated thrust time, far more than any other spacecraft.

“Orbiting both Vesta and Ceres would be truly impossible with conventional propulsion. Thanks to ion propulsion, we’re about to make history as the first spaceship ever to orbit two unexplored alien worlds,” said Marc Rayman, Dawn’s chief engineer and mission director, based at NASA’s Jet Propulsion Laboratory in Pasadena, California.

JOY TO ALL THE WORLDS! Speaking of unexplored alien worlds, let’s zoom out to a cluster 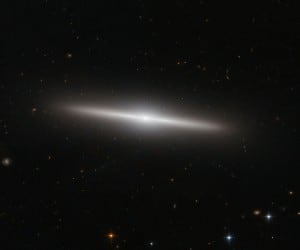 of galaxies 60 million light-years away. This beautiful new image from the Hubble Space Telescope shows an edge-on view of galaxy IC 335 in front of a backdrop of distant galaxies. I wonder how many worlds there might be in this field of view—and what their inhabitants, if any, are doing at this moment?

In each galaxy,
A trillion new wonders wait…
Joy to all the worlds!
—Bob Eklund