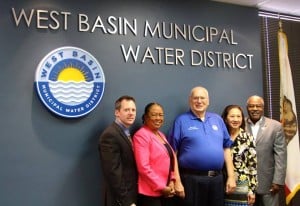 On Dec. 22, 2014, the West Basin Municipal Water District Board of Directors elected Gloria D. Gray to serve as its board president and Carol W. Kwan to serve as its board vice president for 2015. Newly elected Harold C. Williams and Scott Houston will serve as the board treasurer and board secretary, respectively. Their combined leadership will help guide West Basin’s initiatives to provide a safe and reliable future supply of high-quality water to its communities.

“I am honored to serve as West Basin’s board president and guide the new board to ensure we have local water supplies in this time of drought,” said Gray. “While it has been a challenging water year, West Basin plans to further increase its water recycling efforts, conservation and education programs and expand on environmental studies regarding the future of ocean-water desalination. Furthermore, we remain committed to our continued transparency and ensuring public trust.”

As the first African American woman to serve on the West Basin board, Director Gray was first elected to the West Basin Board of Directors in 2006 and recently won re-election in November 2014. She represents Division II which includes the cities of Inglewood, South Ladera Heights, a portion of Lennox and Athens, Howard and Ross-Sexton. Director Gray currently serves as vice chair on the Metropolitan Water District Board of Directors, and in 2014 she was appointed to represent West Basin on the National Water Research Institute Board of Directors. She was also most recently appointed as vice chair of the Santa Monica Bay Restoration Commission Governing Board.

Director Kwan was elected to the West Basin Board of Directors in 1996 as the first female and Asian American member to serve on the board. She represents Division III which includes the cities of Hermosa Beach, Lomita, Manhattan Beach, Redondo Beach and a portion of Torrance. Director Kwan also serves as a board member of Cal Desal, a statewide organization to promote the understanding of the future need for ocean-water desalination projects in California.

Serving the cities of Division I which include Carson, Palos Verdes Estates, Rancho Palos Verdes, Rolling Hills Estates, Rolling Hills, and portions of San Pedro, Harold C. Williams was elected to the West Basin board in November 2014 and has held leadership positions in numerous civic organizations and served on various city commissions. Most recently was the Carson Utility Users’ Tax Citizens Oversight Committee, which he chaired for two years. Williams served as president of the American Public Works Association-Southern California Chapter, president of the City and County Engineers Association, and treasurer of the Los Angeles Council of Black Professional Engineers.