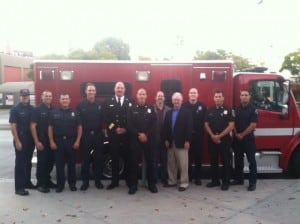 Last Monday, Dec. 8, 2014 saw a small crowd of CC Firefighters out in front of City Hall, standing by a truck about to make a trip. The City and the Sister City Committee were finalizing the donation of a decommissioned paramedic unit from the CCFD to head down to Mexico to be used in Urupan.
Authorized by the council on May 12 of this year, this was the second vehicle donated to Uruapan, replacing the 1995 model that Culver City had donated eight years ago. (See photo below) 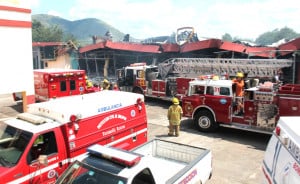 Sonia Karroum and Alan Schriebman were  on hand representing the committee, and the vehicle was to be driven to Uruapan by Uruapan Councilmember Jose Alberto Paz Marín and Uruapan International Affairs Assistant Alfredo Ramírez López.

The CCFD personnel present included Fire Chief Dave White, Battalion Chief Ken Powell, Captain John Bohning, and Paramedics De La Torre, Temple and Canchola as well as Reserve Firefighter Bowen and Paramedic Intern Rosa, and all were pleased to be able to send the truck off to such a useful destination.

The sister city of Urupan, in Michocan, Mexico, has a population of more than 300,000, and the need for emergency medical treatment is often underserved owing to the need for equipment.