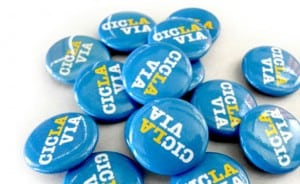 The announcement was made as the event, in its 11th incarnation, took place for the first time in South Los Angeles, on a six-mile stretch along Martin Luther King Jr. Boulevard extending from Leimert Park to Central Avenue, south of downtown. Streets along the route are closed to motorized vehicles.

The nonprofit behind CicLAvia spends about $2 million a year to stage its events, said spokesman Robert Gard. Four are currently planned for next year: in the San Fernando Valley, Pasadena, Culver City/Venice and downtown L.A.

Previous CicLAvia routes have snaked through downtown, East Los Angeles, the Westside and along Wilshire Boulevard. The festival is held at different times throughout the year.
The event is modeled after the “open streets” festival in Bogota, Colombia, which began nearly 40 years ago and uses a fixed route every Sunday. That event’s founder, Jaime Ortiz, was among the speakers during a Sunday morning gathering of dignitaries and guests at Jazz Park, which is along the route.

The route, closed to cars between 9 a.m. and 3 p.m. featured activities at “hubs” along the way, including Leimert Park, Exposition Park, Jazz Park and Central Avenue near Washington Boulevard. At these assembling places, there were food trucks, live music and farmers markets.

Landmarks along the route include the former Dunbar Hotel, where the first national NAACP convention was held and where music greats such as Duke Ellington, Billie Holiday, Louis Armstrong and Ella Fitzgerald performed. It is now used for senior housing. The route also passes by the museums in Exposition Park.