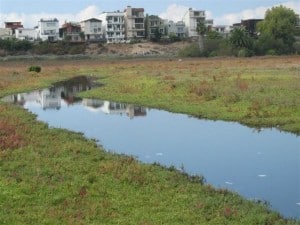 The Annenberg Foundation withdrew its proposal this past Tuesday, Dec 2, 2014  for up to $45 million in funding to develop one of Los Angeles County’s last remaining natural wetlands in Playa del Rey.

The proposal would have brought funds to develop Ballona Wetlands, a 640-acre expanse of undeveloped marshland that has suffered from decades of environmental degradation due to surrounding urban sprawl: sports fields, homeless encampments and recreational activities. According to The Daily Breeze, it faced strong opposition because Wallis Annenberg included a controversial caveat that called for a 46,000-square-foot interpretive center and pet adoption center surrounded by walking trails and other public spaces.

“After considerable thought and reflection, the Annenberg Foundation’s leadership has made a decision to suspend its continuing involvement in the restoration planning for the Ballona Wetlands Ecological Reserve,” a joint written statement from the foundation, the California Department of Fish and Wildlife, Santa Monica Bay Restoration Commission and the Coastal Conservancy stated. “The foundation informed us of this decision after a comprehensive evaluation of all the community-development projects it is involved in that resulted in a re-prioritization of resources and focus.”

A similar Annenberg proposal in Rancho Palos Verdes was withdrawn in 2011 after years of debate over the appropriateness of having a complex dedicated to “companion animals” on coastal land. The $50 million Annenberg project at Lower Point Vicente would have created a “discovery park” designed to complement the city’s neighboring marine-themed Point Vicente Interpretive Center.

The 51,000-square-foot facility would have featured exhibit and classroom space and adoption suites for 10 dogs and eight cats. The Annenberg proposal faced fierce opposition from nearby homeowners and others concerned about allowing a large-scale project on publicly owned coastal land.

The agencies involved in the Ballona Wetlands proposal declined to comment further Tuesday about the reason for the decision or about what this means for the overall redevelopment, which is already underway with a thorough environmental review of the proposed changes by the U.S. Army Corps of Engineers. The first draft of the review was expected late this year or early next year but the Annenberg component was a large part of it.

Walter Lamb, the Ballona Wetlands Land Trust president who has fought the proposal for nearly two years, said he was “elated” by Tuesday’s announcement but concerned about whether it would delay progress.

“It would have been wonderful if the foundation had wanted to invest in the ecosystem itself and to provide outdoor educational opportunities for kids and other improvements with no strings attached,” Lamb said in a statement.