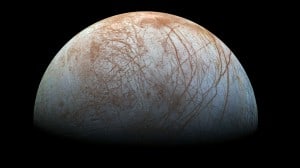 Scientists have produced a new version of what is perhaps NASA’s best view of Jupiter’s ice-covered moon, Europa. The mosaic of color images was obtained in the late 1990s by NASA’s Galileo spacecraft. This is the first time that NASA is publishing a version of the scene produced using modern image processing techniques.

The image features many long, curving and linear fractures in the moon’s bright ice shell. Scientists are eager to learn if the reddish-brown fractures, and other markings spattered across the surface, contain clues about the geological history of Europa and the chemistry of the global ocean that is thought to exist beneath the ice.

In addition to the newly processed image, a new video (youtu.be/kz9VhCQbPAk) details why this likely ocean world is a high priority for future exploration.

Hidden beneath Europa’s icy surface is perhaps the most promising place in our solar system beyond Earth to look for present-day environments that are suitable for life. The Galileo mission found strong evidence that a subsurface ocean of salty water is in contact with a rocky seafloor. The cycling of material between the ocean and ice shell could potentially provide sources of chemical energy that could sustain simple life forms.

SPOOKY ALIGNMENT OF QUASARS ACROSS BILLIONS OF LIGHT-YEARS

over the largest structures ever discovered in the universe. A European research team has found that the rotation axes of the central supermassive black holes in a sample of quasars are parallel to each other over distances of billions of light-years. The team has also found that the rotation axes of these quasars tend to be aligned with the vast structures in the cosmic web in which they reside.

Quasars are galaxies with very active supermassive black holes at their centers. These black holes are surrounded by spinning discs of extremely hot material that is often spewed out in long jets along their axes of rotation. Quasars can shine more brightly than all the stars in the rest of their host galaxies put together.

A team led by Damien Hutsemékers from the University of Liège in Belgium used the VLT to study 93 quasars that were known to form huge groupings spread over billions of light-years, seen at a time when the universe was about one-third of its current age.

“The first odd thing we noticed was that some of the quasars’ rotation axes were aligned with each other—despite the fact that these quasars are separated by billions of light-years,” said Hutsemékers.

The team then went further and looked to see if the rotation axes were linked, not just to each other, but also to the structure of the universe on large scales at that time. 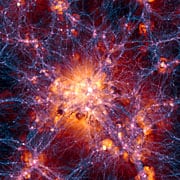 When astronomers look at the distribution of galaxies on scales of billions of light-years they find that they are not evenly distributed. They form a cosmic web of filaments and clumps around huge voids where galaxies are scarce. This intriguing and beautiful arrangement of material is known as large-scale structure.

The new VLT results indicate that the rotation axes of the quasars tend to be parallel to the large-scale structures in which they find themselves. So, if the quasars are in a long filament then the spins of the central black holes will point along the filament. The researchers estimate that the probability that these alignments are simply the result of chance is less than 1%.
Photo credits from Jet Propulsion Labratory (Saturn)  and European Southern Observatory (Quasars)