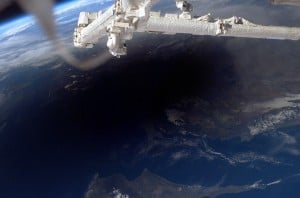 A partial eclipse of the sun will be visible across most of North America on Thursday, October 23, as the Moon partially obscures the Sun between 2:10 and 4:40 p.m. PDT. At eclipse maximum (3:29 p.m.) the Sun will be approximately half covered, as the Moon passes in front of it.

Viewers should exercise extreme caution to avoid eye damage. NEVER look directly at the Sun except through specially-designed filters or through welder’s glass. A good alternative to looking at the Sun is to look for crescent-shaped images of the eclipsed Sun on a sidewalk in the shade of a tree, naturally formed as the sunlight passes through tiny openings between leaves.

During the eclipse, the world-famous Mount Wilson Observatory in the San Gabriel Mountains above Pasadena will present a special eclipse-viewing event for the visiting public. Several telescopes, equipped with filters for safe solar viewing, will be set up in the Observatory parking lot for the public’s enjoyment. In addition, the historic 150-foot solar tower telescope will be open so visitors can view the large projected image of the Sun throughout the eclipse.

The Observatory grounds are open to the public from 10:00 a.m. to 5:00 p.m. daily from April through November. On October 23, the Observatory’s “Cosmic Café,” where visitors to this historic site can purchase fresh-made sandwiches, hot dogs, soft drinks, snacks and souvenirs, will also be open. For driving directions to Mount Wilson and other Observatory visiting information, see www.mtwilson.edu/vis.php. 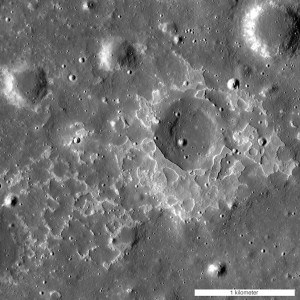 evidence the Moon’s volcanic activity slowed gradually instead of stopping abruptly a billion years ago. Scores of distinctive rock deposits observed by LRO are estimated to be less than 100 million years old. This time period corresponds to Earth’s Cretaceous period, the heyday of dinosaurs. Some areas may be less than 50 million years old. Details of the study are published online in Nature Geoscience [http://www.nature.com/ngeo/journal/vaop/ncurrent/full/ngeo2252.html].

“This finding is the kind of science that is literally going to make geologists rewrite the textbooks about the Moon,” said John Keller, LRO project scientist at NASA’s Goddard Space Flight Center in Greenbelt, Maryland.

The deposits are scattered across the Moon’s dark volcanic plains and are characterized by a mixture of smooth, rounded, shallow mounds next to patches of rough, blocky terrain. Because of this combination of textures, the researchers refer to these unusual areas as irregular mare patches. The features are too small to be seen from Earth, averaging less than a third of a mile (500 meters) across in their largest dimension. One of the largest, a well-studied area called Ina, was imaged from lunar orbit by Apollo 15 astronauts.

Ina appeared to be a one-of-a-kind feature until researchers from Arizona State University in Tempe and Westfälische Wilhelms-Universität Münster in Germany spotted many similar regions in high-resolution images taken by the two Narrow Angle Cameras that are part of the Lunar Reconnaissance Orbiter Camera. The team identified a total of 70 irregular mare patches on the near side of the Moon.

The large number of these features and their wide distribution strongly suggest that late-stage volcanic activity was not an anomaly but an important part of the Moon’s geologic history.