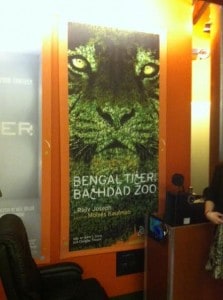 The people leaving the theater at the end of the evening kept repeating the same phrases; “Season tickets,” “We have to get a subscription” and “When are we coming back?” The birthday party for the Kirk Douglas Theater was not just a celebration of the past decade, but a great focus on what the next decade of ground breaking theater in Culver City will be.

All the way back in 2003, the quiet downtown area was starting to see some changes, the most significant of which was the transformation of the Culver Theater from a movie venue to a 317 seat house for live performances. With a $2.5 million donation, Kirk Douglas was the prime benefactor for the new theater that wears his name. On October 14, 2014, the patriarch had every reason to be proud of an evening that showcased not just the highlights of the past, but the vibrant and original creativity that goes on at the KDT every day.

Opening the evening in a lobby full of theater posters from outstanding productions, costumes and props from the shows on display, guests were treated to champagne and appetizers while playing a scavenger hunt, filling their lists with photos and stamps to earn prizes.  As the presentation began, the Artistic Director of the Center Theater Group, Micheal Ritchie, welcomed the crowd with his thoughts on why birthday parties are more fun than anniversaries, and introduced Kirk Douglas.

Speaking from his seat, Douglas radiated the glow of a man pleased with his legacy. “Theater 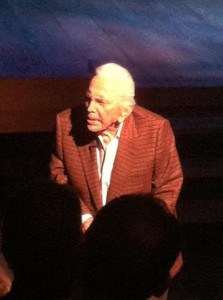 is my first love, and I have found the best way to get on a stage is to have one named after you.” He told a intimate and insightful tale of his dear friend, the late Lauren Bacall, and how they had worked together in New York City during a bleak time when they were both struggling in the stage business. She managed to get him an overcoat, ” …and I wore that coat for two years. It gets cold in New York.”

Bacall also arranged for him to be offered a part in a film, and he came to Los Angeles, leaving behind both New York and stage acting. Some clips from his one-man show, which premiered at KDT in 2009, “Before I Forget ...” showed Douglas to fine effect on stage, and while the crowd was happy to applaud him for his generosity, he also earned their applause as a performer.

Eric Sims, the tireless and always community-minded Director of Theater Operations for the KDT introduced the AVPA Theater students to do a the opening musical number from the show “13” which was work-shopped at the KDT in 2007 and went on the the Mark Taper Forum.

Writer and performer Dael Orlandersmith, whose show “Forever” is currently playing at the KDT  through Oct. 26,  was introduced by Pier Carlo Talenti, the CTG Director of New Play Development. She gave a terrific moment to the evening doing an all-too-brief selection from her wonderful show “Stoop Stories,” which was a DouglasPlus production in 2010. 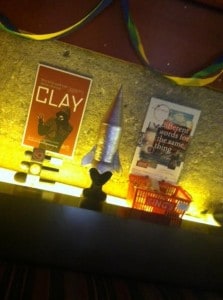 Comedy troupe Culture Clash did a bit from their work “Chavez Ravine,” improvising and updating with topical baseball and political jokes to loud laughter. Nicole Julian, a recent Culver City High alum and the Winner of the CTG August Wilson Monologue Competition offered her talent with her performance of Louise from the Wilson play “Seven Guitars.”

Matt Sax revived his performance from the show “Clay,” which premiered at the KDT in 2007, playing both a wannabe rapper and his mentor. His introduction by Adam Phelan was a mutual declaration of admiration between the actor and the backstage talent that has been in the control booth for all ten years. It was also noted that while Kirk Douglas’ name is on the front of the building, the control booth is named after Anne Douglas, Kirk’s formidable spouse. There is now a plaque to commemorate the fact.

The last performers of the evening were Trey Lyford and Geoff Sobelle, whose work “all wear bowlers” was originally presented at the KDT in 2005 . A beautifully unexpected piece that might be described as slight of hand or clowning in a Bill Irwin style – but not really either – they created the illusion of a third person via a bowler hat and their own gestures. It was playful, witty and unique, and the ideal note before the CCHS Marching Band 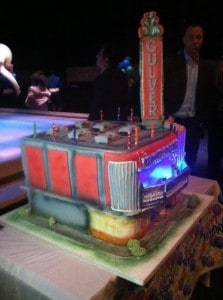 The Kirk Douglas has had three shows that originated there end up on Broadway; “Bloody, Bloody Andrew Jackson,” a revival of “Come Back, Little Sheba,” and the  2010 Pulitzer Prize nominated “Bengal Tiger at the Baghdad Zoo.”

With another 18 shows staging their world premieres at the KDT, this theater is not just the crown of downtown Culver City, but a very bright light in the national theater scene. Kirk and Anne have a lot to be pleased about, and they promised to be back in 2024 for the next big evening. The other theater patrons will be back much, much sooner.