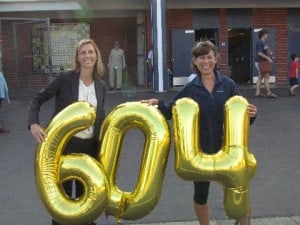 For the sixth consecutive year, under the extraordinary leadership of PTA Membership Chair Ashoo Jain, Linwood E. Howe Elementary School has surpassed its membership numbers from the year before. At the end of the school year 2013-2014, Lin Howe’s PTA memberships totaled 558, and the school won an award for having the highest percentage of enrollment at any unit in the Thirty-Third District of the California State PTA.

As of the writing of this article, only a few weeks into the 2014-2015 school year, Lin Howe has not only surpassed last year’s total, but shattered its goal of 600 PTA members this year, with a current membership total of 661. In addition, Lin Howe once again met the State PTA’s Teachers Matter challenge by enrolling every full-time, home-based, credentialed teacher at Lin Howe.

“This is a big group effort,” said Jain. “I keep track of all of the envelopes, but it’s the parents’ and teachers’ support that got us where we are.”

The school celebrated breaking the 600 mark at a morning assembly. A larger celebration is planned for early October.