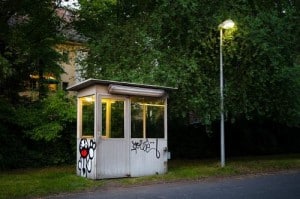 On the other side of the Cold War stand-off, America’s adversary, the German Democratic Republic (GDR, or East Germany) expended significant resources to counter the NATO Allies’ battle for hearts and minds by promoting its own vision of the world. Their ADN (Allgemeiner Deutscher Nachrichtendienst) was the official and only news agency of the GDR, holding a monopoly on all newspapers, radio, and television. From 1971 until its closure in 1992, the ADN headquarters in East Berlin were guarded by a member of the secret service stationed in a prefabricated 20-square-foot aluminum guardhouse that controlled the entrance and exit to the parking lot of the building. One lonely military guard watched the largest mouthpiece of the East German communist government at a site that combined media and defense. The site represents an eastern counterpoint to Cold War activities in Culver City, at the time home to film studios and several of the largest U.S. defense contractors.

In the wake of a rush to get rid of a dark past, Christof Zwiener rescued the ADN guardhouse from destruction and transformed it into a mobile residence for invited artists that documents and comments on perpetual social and political changes. Now an art object in its own right, the marginal light-weight structure that had lost its function with the collapse of communism has been presented in several exhibitions in Berlin (www.adn-pfoertnerhaus.de). At the end of the roving Los Angeles installation, the guardhouse will become a permanent info box and mini-media center in the Wende Museum’s sculpture garden at the Armory.