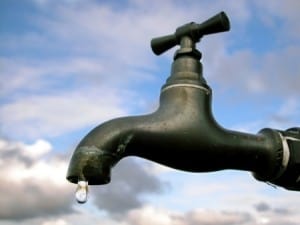 Water usage within West Basin MWD has decreased increased 4.8% compared to last month. This survey compares current use of imported water against last years use of imported water, and show performance relative to the Governors objective to use 20% less. The Survey is of the agencies and retailers within the West Basin Service area and is derived from publicly accessible Water Sales data.

Imported Water is water purchased from the Metropolitan Water District and is typically either from the California Water Project or the Colorado Aqueduct. Imported water does not include local water sources such as groundwater or recycled.

Though water usage has decreased compared to last month, it has only matched the water usage from June. Due to an abnormally lower water usage in August of 2013, the usage has increased 18.53% more than the same period as last year. I included the difference between water used this month of this year vs last year expressed as a percentage. I also included water used since February to give an average consumption since the drought has been officially declared “Severe”. 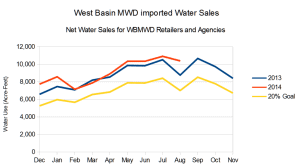 The City of Lomita continues to celebrate its position as leading water conservation within West Basin by using 12.2% less water than August of last year, but oddly is the only City that has used more water than last month: 2.1% more.

Manhattan Beach, Palos Verdes, Hermosa/Redondo Beach and Inglewood not only used less water this month than July, but has dropped below Junes usage.

Malibu and Topanga have used 1.3% less water this year than the same comparable period in 2013.

El Segundo is using 36% more water this year than last but decreased by 4% compared to last month.

The following cities have all used more water than last year but less than July by the following amounts:
Hawthorne -13.2%
El Segundo -4%
Culver City -3.5%