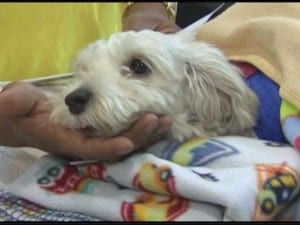 The little white dog whose story drew donations nationwide has made a miraculous turnaround after his leg was nearly severed during a police pursuit last week. Doctors first believed Gordo, a mild-mannered Maltese mix, would lose his limb completely after the rim of a van driven by a stolen vehicle suspect sliced his hip joint during a wild chase in South Los Angeles last Wednesday.

Now, he’s expected to make a full recovery and has been cleared for release from the Access Specialty Animal Hospital at City of Angels in Culver City.

Surgeon Kim Carey says she’s amazed by how well her little patient has recovered. “He’s starting to use his leg nicely. He still has good neurologic function of his leg. So, all in all, he’s doing really well. He’s recovered nicely eating and drinking really well,” Carey said at a Monday news conference.

Gordo’s owner said his children had left a gate open, allowing the family pet to get out.

CBS2/KCAL9 helped the family get Gordo to Access Animal Hospital, where he underwent surgery to repair a fractured leg and pelvis, and was provided with intense wound care. But Carey admits even she was surprised that her team was able to save Gordo’s leg.

“The more we looked at at surgery and on the X-rays, the more astonished I was by it. It was this very clean slice that had it gone a little bit further it would have severed his leg completely,” she explained.

After concern spread on Twitter, hundreds of donations have poured in.

“I think we have enough for vet bills but he is going to need quite a bit of rehab and we plan on transferring funds there so that he can get that care as well,” Carey said. “Our goal get him to walk on all fours, and so physical therapy probably will consist of some weight-shifting activity where we try to get him to bear weight on his operated limb.”

Gordo’s owner is expected to pick him up today, when a technician can go over his at-home care regimen.

The driver of the van involved in the pursuit, identified as 21-year-old Yovani Rodriguez, pleaded guilty Friday to charges of fleeing a peace officer’s vehicle, driving recklessly, driving (or taking) a vehicle without consent, as well as one count of hit-and-run resulting in property damage.

He was sentenced to two years in prison, according to the Los Angeles County’s District Attorney’s Office.