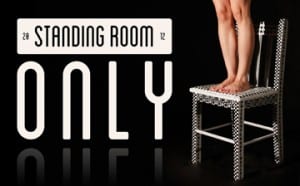 When I turned fifty a little over five years ago, I found myself frozen in the fearsome fall into fewer options. Females will spin fables about the dearth of feasible fellows in the field, but it took me a while to figure out the fact that all but a few are flawed. Of course you hear fairytale facts about all the fish still out in the sea, but, falling in love your fifties is like catching a fly with a chopstick.

It reminds me, somehow, of the commute I used to do in my 1980’s Tokyo days. First of all, it always took an hour to an hour and a half. The trains were standing room only, and I had to change trains up to two or three times. What a radical change: these days I commute to work on my bicycle. I can be seen with my helmet and a pair of goggles to protect my eyes, and often, my skirts hoisted up to my waist (with little exercise pants underneath)! Anyway, on the crowded Tokyo trains, I learned a lesson: when it is so crowded that almost everyone is standing, and there is one lone empty seat, you don’t go running for that seat!

I ignored the old “once burned, twice shy” admonishment, and did it twice. The first time, I sat down and THEN noticed the barf patch underfoot of the seat…I gingerly hoisted myself up and around it and, went to stand in another part of the train car. The second time I sat down like that, I didn’t at first notice the mentally disturbed individual next to me who was yelling at himself and violently slapping his face every few seconds. I felt weird somehow about getting up and moving away, so I sat out the duration, keeping my head down, my hair over my face, and my eyes glued to the book I had brought to read.

If these two concepts seem disconnected, just wait; here’s how my thought process works: the scarcity of available, age-appropriate, male companions reminds me of the paucity of available seating on a Tokyo commuter subway. I hope you are LOLing at my weird connection, and here’s where I’m going with it: it occurred to me that, as a single fifty-something female, you circulate through your chosen hobbies, which may include dancing, hiking, adult education classes, beverage tastings, or various other “singles” activities. Lots of times, you are just connecting with your same-old, same-old buddies. Occasionally, though, in that forest, a lone flower appears: a seemingly available, un-ring-fingered, reasonably attractive, male.

Since I am so gregarious, I’ll end up approaching such specimens, and chatting them up. I’m a good back-leader in dancing, meaning, I am able to do the (female) follow role, putting the guy in the (male) lead driver’s seat, and gently lead from the second-in-command position. This aspect of my skill set is symbolic of my personality as well, and I use it all over my personal and professional lives (although my sons will no doubt claim my “leading” is more overt – can one use a ” smiley face” icon in published writing?) In any case, what happens is that I am now learning to find fatal flaws up front.

I’ve unmasked gigolos, serial non-committers, two-timers, searchers of mothers/caretakers, penny-pinchers, Luddite technophobes, seekers of American legal status, and a host of other fundamentally co-dependent, unavailable, exemplars of post-women’s lib era confused men. The old me, the relationship-craver, would, in my loneliness, get hooked before the vetting process was complete. I would have hope. I would think I’d finally found a soul-mate and then try to back solve the person into what I needed; I’d make excuses for anything from odd lapses in communication and dutch-treat invitations, to rationalizations for not having a job or a car.

Now, getting involved with guys like this, to me, is like rushing onto a crowded subway and grabbing the only open seat.

Some of the more faint-hearted female acquaintances I encounter will often stand by and observe, and once they see that I have made initial inquiries, and have seemingly “vetted” a guy, they’ll rush in and try to make conversation, or wrest some sort of commitment (a dance, a date, whatever) from the guy. A feeding frenzy then ensues, and, overnight, a schmuck can become a hot commodity. Extra hungry mamas seeking not only a hobby partner, but longer-term male companionship will also begin to circle the camp, and an emotionally charged environment is created, which kills all the fun. One of my multiple-dance-genre enjoying (male) friends put it so well yesterday, “I don’t like it how at some of the dance venues we go to, it is more like people are going to work than being there just to enjoy.” I vow to endeavor, from now on, to seek activities sans the “meet market” aspect, so seriously inappropriate for us fifty-and-above folk. Time to give that up!

The new me will act like the real people. I define “real people” as those who for whatever reason found their self-esteem early. They are people who never had a weight problem, who met life-partners and were able to tolerate long, productive relationships. They are the type who are easily hired for jobs, and promoted without obsequious scraping. They are B+ students, 85 per centers, looking to go to “small” colleges with a personalized feel. As men, they don’t vacillate too much, they know what they want, and go for it. As women, they are content enough to wait to be pursued by men like this. These people are good at leaving the fear of the various dangers in life to a higher power, instead of trying to exert too much control over situations. People like this have patience, and I ain’t known for mine.

I will try to emulate these behaviors without losing the drive and passion I am famous for having. Those of us possessed with the internal motivators of energy and enthusiasm are valued for our drive and passion on the vanilla side, although sometimes reviled for our obsession and compulsion on the chocolate side. Whenever possible, when we show up on a street with ten restaurants, and want to figure out where to eat (with or without Yelp’s help), let’s prepare ourselves to stand in line for at least a little while, rather than rushing in to the place with the open tables.