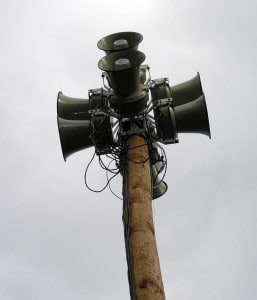 Until the end of 2013, a Cold War era siren stood to alert local citizens of nuclear attack at the corner of Sixth Street and Mills Avenue in Claremont, California. Although no longer in use, the siren remained “hidden in plain sight” on the Claremont Colleges campus. Soon it will join the collection at the Wende Museum, currently located on Buckingham Parkway, soon to be opening on Culver Blvd.

During the recent landscaping renovation of Claremont McKenna College, the siren was removed and transported to a storage yard, where it was left without any clear plans for its future. Attached to a pole measuring 32 feet in length and weighing more than a ton, the only plan for the siren was to have it remain lying on its side out of public view.

Joseph Harper and Kelsey Picken, co-founders of the Cold War: L.A.website, noticed that the siren was missing from its original location and quickly tracked it down. Brian Worley, Facilities Director at Claremont McKenna College, provided the information needed to come up with a proposal to move the siren from the storage yard to a new home at The Wende Museum in Culver City. With the assistance of Professor Joshua Goode, Chair of the History and Museum Studies programs at Claremont Graduate University, the proposal was quickly approved by the college and the city. Coordinating the efforts between CMC, CGU, the City of Claremont, and The Wende Museum, Mr. Worley played an integral part in ensuring the success of the project and overseeing transportation of the siren the 45 miles across Los Angeles County to its new home. The Wende Museum plans to mount the siren in an upright position at their new armory headquarters, which will open in 2015. In the meantime, it currently is stored in the back loading area of the building site where it can be viewed from the street.

The importance of this project for Cold War: L.A., The Wende Museum, the Claremont Colleges, and the siren itself, is tremendous. Collaborations such as these generate opportunities to save, restore, and protect history. According to Dr. Goode, “This project and its entire trajectory represent exactly the kind of research that we aim for in Museum Studies and at CGU more broadly… [T]hrough the initiative of our students, a class project became a partnered project with CGU working with our five College colleagues, the City of Claremont and The Wende Museum to benefit the Los Angeles community writ large. It will serve as a shining example of the work we do in Museum Studies thanks to two very insightful students.” For the creators of ColdWarLA.com, it is their hope that projects such as these will bring more awareness to the everlasting history and artifacts within and around the City of Los Angeles, as well as the state of California.