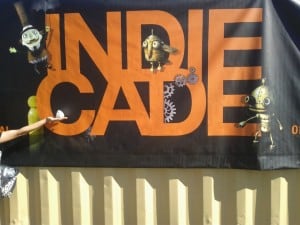 Stephanie Barish was abashed. The founder and CEO of INDIEcade stood before the city council and ultimately withdrew her request for the fee waiver for two rooms at Vets Auditorium. After failing to give the council the information they had asked for – her budget and accounting from last year – she was faced with some unhappy and angry council members.

Culver City has been a major sponsor of the independent gaming festival since it’s beginning five years ago, and is still sponsoring. The request of additional help had some of the council members wondering why an event that was not a non-profit fundraiser was in need of more assistance.

Jeff Cooper was blunt, saying “We asked for something and you don’t want to share this. It’s not credible that you organization does not have a budget, that you can’t show us your profit and loss statement from the last year…I’m not willing to add in one more dollar.”

While Council member Mehaul O’Leary noted that the rooms might not even be rented out, “it is just space to be used – If we don’t give them to INDIEcade they may well stand vacant.”

Barish was apologetic for the lack of information, but not forthcoming.

Council member Jim Clarke offered that when the council supports an event with in-kind donations “…we figure the event is going to help us, call attention to Culver City and INdecaced has done that in the past, but without the distinction of being a nonprofit, we could leave ourselves open to some residents saying we are funding a private entity.”

Mayor Meghan Sahli-Wells tried to shift the focus back to the good that the festival could do for all the businesses in Culver City, saying “I understand my colleagues concerns, and in gneral when we have these discussions, we are talking about non- profit based events.  The difference is that we are talking a about economic development, and INDIEcade has generated an enormous amount of press and synchromized with a large number of buisiness – the gaming industry, which is out-earning the movie business at this point.”

She continued “We used to have redevelopment, and then the state took away those dollars, and we are in a new day. We have to figure out how we are going to continue to have economic development without dipping into the general fund.”

But Barish withdrew the request, saying that “We love Culver City, we love having the festival here, and we’ll just find another way to work this.”

Since the motion had already been made, the council voted with the expected 2-3 loss for the agenda item; Shali-Wells and O’Leary in favor, and Cooper, Weissman and Clarke against.

So, the INDIEcade gamers will be back in October with the 6th annual festival. Losing a few points might be strategic to a bigger win.