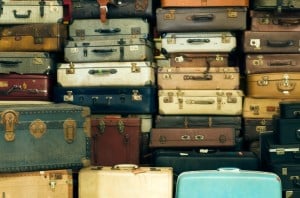 Over the baggage allowance…

As I approached the age of 55 last year, I found it in me to begin to write. I’ve written mostly about my travels, my perspectives on life, and my views on education. In the process, I’ve experienced some of the most radical changes in my life to this time, and now, nearing the last few months of my 55th year, I’m setting out on what I anticipate to be an entirely new journey from here on out. I have a new job, a new body and a new mind – or, at least, I am trying to have those three things.

I always thought that even an older woman can remain attractive if she’s thin. I noticed this first one summer when I was in Saigon. We were brunching at the rooftop buffet of the Metropole, and I spied a woman at least ten years older than me, gray and wrinkled. But she was thin and, hence, able to be dressed in understated elegance, and I envied her for it. I said this to Robyn, my Australian travel companion, with whom I have traversed the world from Istanbul to Israel, and next year India and Eastern Europe (we skipped a year last year). Robyn and I agreed that our travels would only get harder if we didn’t find a way to reduce our respective loads. As is storied in my prior columns, the thing that got me going was the simple act of trying something new: I hobbled along in Culver City’s 5K last year. Other than that experience itself, there were no external motivators at all. My head just clicked on internally, like lefty-loosey instead of righty-tighty. And, with so-called baby steps, I descended from fat-and-fifty to fit-and-fifty over the course of this past year. Life is beautiful when you can be putting and/or giving away your big sizes instead of your small ones.

But which came first? The body or the mind? What’s happened to my mind is that I’m learning how to let go. This is a work in progress. I am still in the throes of divesting myself of baggage. My baggage comes in the form of combating my urges to: hang on to too many physical artifacts, feel the necessity to eat and drink with abandon, and control the outcome of people’s actions. I spoke of relinquishing my romance with food above; next comes the “stuff.”

My young Padawan, my successor to my teaching position, grabbed me by the hand and made me throw away tons of paper that I’d accumulated over my ten years in the classroom before she moved in. Whoosh, did that feel good, and I plan (I swear on my column that I will do it) to do it with the papers housed in my garage now, some which go back to my travel industry days! If I was able to divest of teaching materials from these past ten years, I have NO excuse for keeping stuff from the prior career. I promise to do it by the end of September, and I’m sure I’ll be writing again later about how that went for me!

When The Padawan was student teaching with me last semester, I was perturbed one day to find that she’d used large sheets of construction paper for a student activity that involved the writing of some key terms onto the paper. Not only is that an acceptable use of the materials, but it was a creative one. I kept my mouth shut about “wasting my colored construction paper” and – me in my ways – I surreptitiously attempted to salvage the used paper by “recycling” it. Former students and other co-classroom-ists will tell you that I never throw away the scraps of colored construction paper. I usually cut (or have them cut up) them into small triangles and squares for student mosaic projects. I am admitting here that this is a craziness of mine; it is a post-Holocaust (during which era I was not even born) mentality of worrying about not having enough of something; it is like a fear of loss.

Upon reflection, I can claim that there had been a couple of times over my ten years of my teaching that budgets were tight on supplies. One summer they didn’t provide art supplies for our classes, and I was glad to have my stash. But as G-d is my witness, I will never allow such events to cause my hoarding proclivity to flare up any more…sorry Costco shoppers! My house was burglarized back in 2001, and I lost all of the jewelry I’d collected during my years living high on the hog in Asia. I still miss those pieces of jewelry, but if I can live only with the memory of them, I can surely live with only the memory of my papers, my files, my fat clothes…I know for sure that I do not want my sons to have to go through them when I am gone. If they did, I know they’d end up in “circular files,” which is exactly where they belong right now.

The other baggage that is more of a challenge to get rid of is… making an effort of trying (not) to control outcomes involving other people. Now, as you learn to live life with fewer plans, things don’t always work out the way you might have wanted. As we said in the old country, “Man plans and G-d laughs.” For example, up to about five years ago, I used to try to make sure I was never alone; to have companions for all meals, and all times of the day. I’d ask for commitments of time from people, and get disappointed when I couldn’t mark something in pen on my calendar. In dance terminology, I had to have every spot filed on my dance card.

Now, however, I’ve been trying to let things happen on their own a bit more. I let my oldest son figure out his living arrangements for the third year of college on his own. Fact of the matter is, my “letting go” resulted in him couch surfing, which did not necessarily fill my bucket with happiness, but, que sera sera (Spanish: whatever will be, will be), it did eventually work out, and he’s moving into a new place this weekend. I also recently set out to try and enjoy an evening of dancing without the prior commitments that you must sometimes pursue in situations where there are two follows (women) to every lead (man). This is risky business; I might have paid my entrance fee, and had to sit out most of the evening. My willingness to take a risk that time ultimately yielded me a new partner who I would not have been able to meet otherwise; c’est la vie (French: that’s life), in a good way. Less planning does lead to more time alone, however, which I am finding now is not the worst thing in the world; it gives me time to write! And hakuna matata (Swahili: no problem) with that at all; I have finally taught myself how to enjoy the time I have alone, without unnecessary conversation, without the need to spend money, without having to run from one activity to another non-stop.

In my “Japanologist” circles, we often discuss the frequent use of the phrase “shikata ga nai” (nothing can be done about it) in the culture. It is debatable whether the phrase is truly used more frequently than, say, the English “sh-t happens,” but I would make the case that a culture which brings up people to be more willing to resign themselves to “leave things in the hands of a higher power” might be a less stressful one. Maybe that’s why you often hear of Japanese people (including Japanese Americans) living past 100 years of age.

Who would have ever thought that, in the waning days of my 55th year, I would have reduced my load. Here’s to new beginnings at ANY age!