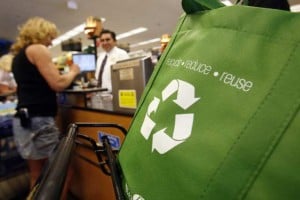 After six long years and eight legislative attempts, victory against the plastic bag is ours. Environmentalists bagged a huge win on Friday, August 29, 2014 when the California Legislature approved a ban on the distribution of single-use plastic shopping bags at major retailers throughout the state.
After 124 cities and counties in the state had already banned the bag, this law now bans the bag statewide.
Culver City’s plastic bag ban, which went into effect on Dec. 28 of 2013 was part of a grassroots effort to get major retailers to stop giving away single use plastic bags.

According to Californians Against Waste, Californians used 13 billion plastic bags in 2011. That’s roughly 400 bags per second. Far too many of these bags are littered and enter the ocean. Plastic bags are a primary source of litter because they are light, aerodynamic and are easily transported by wind into the watershed. Once littered, plastic bags essentially never biodegrade. Instead the sun breaks them into small pieces that choke and kill sensitive marine species such as turtles and birds.

We can hope for better statistics in the coming years. While there will still be plastic bags used in the state, local shoppers already have a good start on the habit of bringing their own re-usable bags when shopping.

What next? Environmental advocates at Heal the Bay have their sights set on a statewide trash policy that would “compel all municipalities to meet strict numeric restrictions on the amount of trash they send to our waters.”

In August 2013, the NRDC estimated that local California communities spend over $428 million each year to keep marine debris from polluting our waters–an average of $10.71 per resident.

Between 60% and 80% of marine debris overall and up to 90% of floating debris is plastic. Furthermore, 80% of marine debris is estimated to be land-sourced, mostly from urban runoff. This marine debris rides ocean currents that can take it across the globe, as evidenced by the beach debris on remote Pacific Atolls. As plastic is broken down by the sun it joins the great mass of plastic particles in our oceans.

So, every time you take your bags to the grocery store or the farmer’s market, every time you volunteer to clean up the creek or the beach, you are setting an example that resonates all the way to Sacramento.

Keep up the good work.