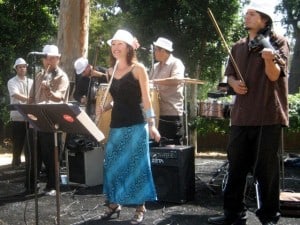 Kátia Moraes & Brazilian Heart plus the Orquesta Charangoa will perform at the Summer Concert Series this Thursday on Aug.7 at 7 pm at the City Hall courtyard – bring your blanket and your picnic basket, and be ready for an evening of great music. Kátia Moraes (pictured below) was named the World Music Artist of the Year 2013.  Don Heckman of the Los Angeles Times writes in his review, “… and Moraes’ singing, as always, was a virtual definition of the passion that is an implicit part of Brazilian music.”

For over 15 years, Orquesta Charangoa (pictured left) has been a thriving force in Los Angeles’ vibrant Latin Music scene. What sets them apart from the rest? Authentic Cuban music in the Charanga style. Charangoa stays true to the tradition featuring flute, violins, piano, double bass, timbales, congas and güiro.

Since 1997 Orquesta Charangoa has been delighting audiences with the classic sounds of Cuban Charanga music. Charanga is like salsa, but with violins and flute, rich vocal harmonies, Cuban percussion, piano and bass. It’s exciting and beautiful dance music. The group is very flexible and can use 3 to 12 musicians, depending on your needs. They play a wide variety of songs including salsa, cha cha cha, merengue, boleros, cumbias and latin jazz. The band is an active part of the Los Angeles salsa scene. They also have performed is some of L.A.’s top venues including the Dorothy Chandler Pavilion, Grand Performances at the Water Court, The Conga Room, Levitt Pavilion, Oxnard Salsa Festival, Watts Towers Jazz Festival, L.A. Cuban Festival, Alhambra Jubilee, Long Beach Cuban Festival, Dance Downtown at the Music Center, El Floridita, The Granada, U.C.L.A., U.S.C., Claremont College, and Cal Tech. Television appearances include KTTV’s “10 O’Clock News” and KCET’s Holiday Celebration”.