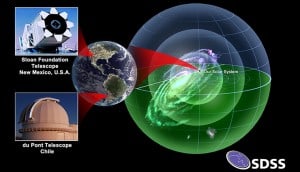 Building on 14 years of extraordinary discoveries, the Sloan Digital Sky Survey (SDSS) has launched a major program of three new surveys, adding novel capabilities to expand its census of the Universe into regions it had been unable to explore before.

This new phase of SDSS will:

–Explore the compositions and motions of stars across the entire Milky Way in unprecedented detail, using a telescope in Chile along with the existing Sloan Foundation Telescope in New Mexico.

–Make detailed maps of the internal structure of thousands of nearby galaxies to determine how they have grown and changed over billions of years, using a novel optical fiber bundle technology that can take spectra of each different part of a galaxy at once.

–Measure the expansion of the Universe during a poorly understood five-billion-year period of the Universe’s history when Dark Energy started to drive its expansion, using a new set of galaxies and quasars.

The new survey is a collaboration of more than 200 astronomers at more than 40 institutions on four continents, and it incorporates telescopes in both the Northern and Southern Hemispheres. With these two telescopes, the SDSS will be able to see the entire sky for the first time.

“Over the last fourteen years, many people have used SDSS data to make numerous discoveries that have revolutionized astronomy,” said Michael Blanton of New York University, the director of the new survey. “We have mapped the large-scale structure of the Universe, traced out previously unknown structures in the Milky Way, and made unanticipated discoveries from asteroids in our own Solar System to the most distant quasars.” 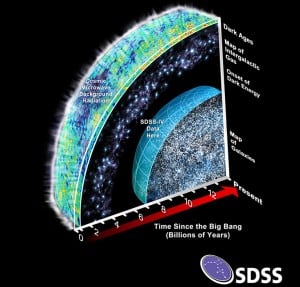 significantly expand our understanding of the nature of the Universe at all scales, from our own galaxy to the distant universe. In our galaxy, the new SDSS will see hundreds of thousands of individual stars, including stars that were born at the birth of the Milky Way and stars born in the past few million years, just yesterday in cosmic terms. Measuring the compositions, positions, and motions of individual stars will reveal how the Galaxy evolved from the distant past to today.

“The SDSS has observed more than half a million Milky Way stars over the past fourteen years, which I call a good start,” said Jennifer Johnson of The Ohio State University, the Scientific Spokesperson of the new SDSS. “However, from the Northern Hemisphere, the Earth blocks our view of a quarter of the Milky Way, and mostly obscures our view of the galactic center. So there are literally entire regions of the Galaxy that the SDSS has yet to see.”

This new phase will complete the picture. In addition to the Sloan Foundation 2.5-meter Telescope in New Mexico, SDSS will use the 2.5-meter Irenee du Pont Telescope at Las Campanas Observatory, high in the Chilean Andes and home to the clearest skies on the planet. In addition to completing the full study of the Milky Way, the du Pont telescope will also observe stars in the nearby Magellanic Clouds, giving astronomers a better understanding of the Milky Way’s immediate environs.