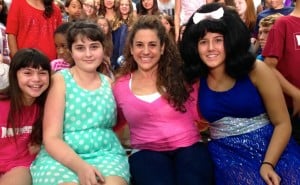 Opening night of any show is often a time of high energy and excitement, but this morning the cast at the dee-Lightful Summer Musical Theater Camp got an unexpected thrill; a surprise visit from Marissa Jaret Winokur, the original Tracy Turnblad in the Broadway production of Hairspray.

Just as the cast was finishing their run-through of the closing musical number “You Can’t Stop the Beat,” Winokur arrived sporting big hair and a bright pink cardigan and watched the choreography with obvious pleasure.

Getting everyone seated, dee-Lightful Director Dolores Aguanno introduced the acclaimed actress to the children as ‘Broadway’s original Tracy!” While some of the younger cast members did not know what a Tony award was, many of the older ones knew quite well, and seemed justifiably impressed to be sitting so close to a winner.

Winokur was sparkling, if slightly raspy (she apologized that she had been out at an amusement park the day before and had done a fair amount of screaming – her voice was a bit tired) and she spoke about her time on Broadway and answered questions about the famously controversial musical, where she performed eight shows a week for eight years.

“How did I get there?” she responded to a shy inquiry,  “I got there doing just what you are doing; I did theater at my school, I did theater at summer camp, I did theater everywhere I could and every chance I got.. AND I did not get the lead, I almost never got the role I wanted, but I kept at it, because I knew I would. When I was cast as Tracy it was really a dream come true.”

Aguanno had previously said that she was uncertain about doing Hairspray with kids. “Let’s face it, this is a very sophisticated show; racial issues, gender issues, weight issues, there’s something here to offend everyone. But the kids really wanted to do it, and after looking at the script again, I thought yes, we can make this work.”

Cast members who asked questions about being nervous, or forgetting lines got reassured that it was not unprofessional. “Everyone goofs up once in a while – the important thing is to put it behind you as quickly as possible, and get right into the next scene… and everyone gets nervous – I still get nervous – in fact, I’m nervous standing here talking to all of you right now!”  The cast laughed in appreciation.

With three casts rotating through the production, all the Tracys got to sit for a picture with Marissa.( see above)

Despite the questions, nerves were not in evidence at rehearsal, and opening night looks to be a lot of fun. Once you get started, you really can’t stop the beat.

dee-Lightful presents “Hairspray, Jr.” July 9 -12 at the Vet’s Auditorium – For more info, click on the banner ad to go to the dee-Lightful website.