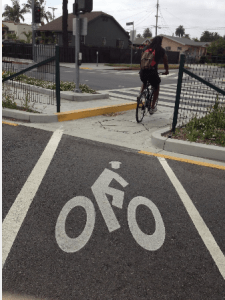 As cyclists eagerly await completion of the Expo Bikeway from Culver City to Santa Monica, some fixes are ongoing to the maligned-but-improving Phase I bike path, according to LA Streesblog.

LADOT has improved safety markings where the Expo bikeway crosses the railroad tracks, at the intersection of Exposition Blvd., Gramercy Pl., and Rodeo Rd.

The Advisory Committee, pushed the City Council and Expo Construction Authority to make changes to the intersection. The city council passed a resolution, the LADOT got to work and two years later the intersection was improved. The new intersection includes clearly marked places for bicycles to wait for the signal, better signage, and, yes, bright green paint.

Weiss asked that we credit LADOT Bikeways, and the offices of Councilmember Herb Wesson and Mayor Eric Garcetti for their work on this project.

The Expo/Grammercy/Rodeo intersection has new markings, some green paint and better signage.