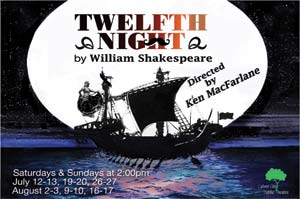 Culver City Public Theatre (CCPT) presents its 16th season of free theater in Carlson Park for families and theater fans of all ages. All shows are open to the public and admission is free.

The season opens Saturday, July 12th at 12:00 noon, with the world premiere of THE QUIBBLING SIBLINGS, written and directed by 8-year CCPT veteran Blake Anthony Edwards. This is Mr. Edward’s third play written for Children’s Popcorn Theatre, our production specifically created for young audiences. His very well-received previous shows were Big Bad Wolf Tales and The Odyssey. He has appeared onstage for CCPT in King Midas, The Good Doctor, Sluefoot Sue & Pecos Bill and She Stoops to Conquer. He has also performed in numerous productions in the LA area, including In on It, for which he received an LA Weekly award nomination. THE QUIBBLING SIBLINGS is a hilarious and imaginative adaptation of The Four Skillful Brothers from the Grimms’ collection of fairytales. It tells the story of four brothers and sisters who are constantly bickering. But when a dragon captures the kingdom’s princess, the siblings will have to put aside their differences and wok together to save her.

CCPT’s main stage show is Shakespeare’s comedy TWELFTH NIGHT, OR WHAT YOU WILL, opening July 12th at 2:00 pm. Ken MacFarlane returns for his sixth CCPT show having previously directed Medea, Antigone and Much Ado About Nothing, and acted in The Bacchae and Enemy of the People. He has extensive film and theatre credits, both as actor and director. In this classic comedy, a shipwrecked twin sister disguises herself as a man and hilarity results from mistaken identities, mischievous house-servants and an inadvertent love triangle, in typical Shakespearean style.

Patrons are encouraged to bring a blanket or lawn chairs for seating and to respect the surrounding neighborhood residences by refraining from parking in front of them.

There are no dogs permitted in Carlson Park.

(the corner of Motor and Braddock)

Tickets: No Tickets necessary. Performances are free/donation only,

and open to the public.

Twelfth Night, or What You Will

(the corner of Motor and Braddock)

Tickets: No Tickets necessary. Performances are free/donation only,

and open to the public.