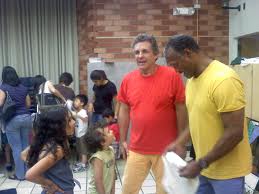 Performances are every Wednesday at 2 pm from July 2 through July 30 and are 45-minutes long. Admission is free.

Animals of Asia: A cockroach from Iran goes looking for a husband, an Indian Elephant flies to heaven, and an adventurous Chinese rabbit is the reason why rabbits have long ears

African Animal Tales: A frog learns to sing, Brother Rabbit gets Brother Lion to stop tearing up the neighborhood, and a magic cow causes a rift between friends.

Cuentos de los Animales: A man is given the gift of understanding the language of the animals, a wise man uses animals to save a marriage, and a conceited burro gets it in the end.

Aesop’s Animals: A bat can’t decide whose side he should take in the battle between the beasts and the birds, a lion and an elephant face their fears, and the hare once again tries to beat the tortoise in a race.

Watch Out for Predators: A rabbit outsmarts a coyote, a cat eats a mouse who was really a poet, and a rooster’s nightmare about a fox comes true. Program grand finale after the performance.

In unique We Tell Stories fashion, actors unfurl imaginative costumes and props from an old steamer trunk and the fun begins. Audience members participate from their seats, and then join actors on stage to play integral parts in each performance. Parents and kids delight in this family activity that is both entertaining and culturally enriching.

With a repertoire of twelve “trunk shows,” WTS brings classic literature and folk tales to life in classrooms, theatres, schools, museums, festivals, special events, and libraries. We Tell Stories’ goals are to inspire creativity, enhance literacy, cultivate intercultural awareness and harmony, and spark a love of the theatre and spoken word. Since 1981, WTS has been promoting arts education in schools throughout the Southland with assembly programs, and student & professional development workshops.

These performances are made possible in part by a Culver City Performing Arts Grant with support from Sony Pictures Entertainment. The Culver City Julian Dixon Library is part of the County of Los Angeles Public Library: www.colapublib.org.