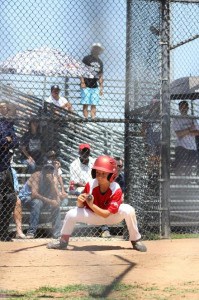 Culver City jumped out to an 8-4 lead against City of Angels behind the pitching of Jason Romero and the hitting of third basemen Travers Tobis. In the top of the sixth (last) inning, City of Angels erupted for four runs to tie the game. With one out in the bottom of the sixth, Diego Lopez walked on a 3-2 pitch. Romero singled to right, sending Lopez to second. Thomas Chee singled to short left, loading the bases and bringing up leadoff hitter, Tommy Peacock. Peacock, playing in his first all star game ever, had reached base three of his first four times up. Peacock promptly watched the first pitch go by for a strike, and fouled off the second pitch. Down 0-2 in the count, Peacock, with the eye of an eagle, took the next three pitches, bringing the count to 3-2. The next pitched sailed high, and Peacock walked, scoring Lopez with the winning run.

With one out and two on in the bottom of the fifth, Culver City turned to closer Andy Perez to preserve the lead. Perez promptly struck out the first two batters he faced, sending the game into the sixth and final inning. Not satisfied with a 6-3 lead, Culver City exploded for 14 sixth inning runs. Peacock came in to close the game. Offensive leaders for Culver City included Zeidman (3 for 3, 2 walks and a hit by pitch), Stephan Thomas (2 for 3, 2 walks, on base all five plate appearances), and Tanahara (four runs scored).