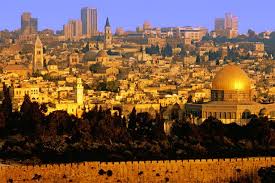 China (中国) calls itself the “Middle Kingdom.” The kanji characters that the Japanese use to represent the name of the country are pictographs for exactly that: 中 (middle) 国 (kingdom). Most countries in the world teach their children geography by depicting their country in the center of a flattened globe map. But there is only one place that that truly feels like it is the center of the world for everyone who visits it: the city of Jerusalem.

Who am I to have the chutzpah to write about this place? Countless books have been written about it, including The Bible itself, for heaven’s sake, and countless stories have been told, and songs sung, with Jerusalem as a setting. Within Israeli folk dancing, we of course have a few dances dedicated to the city. There are cookbooks, arts books, guide books, you name it; there is no art form that has not dealt with Jerusalem as a subject. I am writing about it a little this week, because I’m here in Israel.

Jerusalem, the spiritual center of all three major western religions: Judaism, Christianity and Islam, is an entirely unique place that you enter via a road so steep that your car sputters as it ascends, and your ears plug up from the altitude. Many buildings are built with “Jerusalem stone,” a rough-hewn white/gold travertine. As you wind your way through the city, the streets are named for famous Jewish heroes, politicians and personalities in history. There are landmarks that have existed for thousands of years, predating even those of other Mediterranean countries that were super powers of the past. Stuff is older than anything one might encounter anywhere else in the world.

Having said that, Jerusalem is a modern city; it is the capital of the westernized, high-tech state of Israel. The government buildings are located in Jerusalem, as is the Israel Museum, and the world-renowned Holocaust Memorial Museum: Yad Vashem. It is surrounded by the “West Bank,” and a wrong turn land can land you in Palestinian territory. The world acts like Jerusalem and its borders being disputed is some modern day problem; it’s not. In fact, there’s scarcely, if ever, been a time in recorded history that the question of who Jerusalem belongs to has not been disputed. For more information, read Jerusalem: A Biography by Simon Sebag Montefiore, or the book I’ve been trying to read on this trip, which Montefiore refers to in his work as well: Jerusalem: One City, Three Faiths by Karen Armstrong. This is not an exhaustive list of the library of literature you can read about Jerusalem, these are just a couple of tomes for a start.

Jerusalem is pretty quiet on the sabbath (from Friday sundown to Saturday sundown), as is the country in general. Right now, I am not actually in Jerusalem; I am staying in the northern region of the country, between the Sea of Galilee and the Mediterranean. Today being Friday, everyone greets each other with a “shabbat shalom,” as the stores close early, and the week is wound down. Although the religious attend services in synagogues, for the less observant, the tradition of settling in to spend time with family or friends remains.

In Israel, there is (folk) dancing on the beach here and there, up and down the coast, which is a main priority for me when I visit. Tomorrow, I will dance on the beach in Tel Aviv. Here, in stark contrast to our home stretch of beach: Santa Monica, not only is the dance provider not required to show a permit, but the city promotes and even pays for whatever it costs to put on a dance session for the public. The dancing has become somewhat of a tourist attraction; there is even a sign posted on the idyllic spot where it rakes place, below the Renaissance hotel, nestled amongst coffee shops, restaurants, and looking out at the Mediterranean Sea.

I first came to Israel in 1982. I was living in Japan, and my parents and sister were living in Milan. My mother decided that proximity to Italy dictated a trip for herself, my sister and I, without my father, to the Holy Land. Why my father did not go is another story. In any case, my mother summoned me from my perch in Japan, and off the three of us went, on a bus tour of the country.

We were to have gone from as far south as Arad, a town in the Negev desert, as far north as Akko, and as far to the east as the Golan Heights. I missed that the Golan, sick in bed back at the kibbutz we stayed at as part of the tour. I finally settled that score this trip; I spent a day wine and chocolate tasting in the Golan Heights, circled the Sea of Galilee to get there, not to mention looking out onto Syria from its strategic vantage point. The day I was there was quiet on that (eastern) front. On the tour in ’82, we also visited all of the major sites of the country, which included areas now all but off limits to Jewish travelers, such as the Temple Mount and the Church of the Nativity in Bethlehem.

At the time, Israel itself didn’t make such a big impression on me. I was living the life I’d dreamt of in Japan, practically having turned Japanese. Israel seemed to me then to be just another country on the globe under my belt, having traveled to many countries in Europe and Asia. I was yet unsensitized to the overt, covert and inadvertent anti-Semitism rampant in the world; I was shielded from it in Japan by my role as just another gaijin.

And Israel was not then what it is today. I remember it as a desert, with plain, beige buildings here and there; the whole place was…beige, sand-colored, like a…desert. I mean, I was coming from a colorful, neon Tokyo of skyscrapers, elevated trains and 80’s-rich, high-energy urban life. I don’t even remember seeing much of what is called the Old City of Jerusalem then; they had us staying at a high rise hotel on the outskirts of the city, and we were being bused around, so I have no recollection of walking around on the ground. I recall being whisked via bus over to the “Western Wall,” formerly known as the “Wailing Wall,” and then going up some steep stairs to see the Al Aqsa Mosque and Dome of the Rock, which is not as easy to do these days.

I guess the trip must have been near year end, because I remember a waiter at the hotel coming around asking, “Who is a Christmas, and who is a Hanukkah?” My mother was surprised to find that everybody, from the front desk staff at the hotel, to the housekeepers, to the bus driver to the tour guide was…Jewish. I had a similar epiphany on the beach the other day; as I people watched, I noticed that everybody looked Jewish, and then I realized where I was. As a minority in the United States, we tend to look around a crowd of strangers and take mental note of how many people “look like us” in public. I have heard others make comments like, “Hey, I was the only black person in that restaurant.” Years back, before I had gone to Israel, a Japanese friend who often traveled here for business told me, “Ruth-san, every time I go to Israel, I see a million you’s everywhere.” This is the only country I’ve ever visited that has a million me’s! And it’s not only looks. Even though I can’t understand much Hebrew, I see people going at a conversation with a similar gusto to my own. I encounter people who act like me, and share my interests.

There are sometimes questions about the safety of traveling here, and, “no worries,” I say, to a person from the United States, who, day-to-day, if you are like me, wonders when and where the next mass shooting will take place. According to CNN, in an article entitled, “A closer look: How many Newtown-like school shootings since Sandy Hook?” by Ashley Fantz, Lindsey Knight and Kevin Wang, there has been one school shooting every five weeks since Sandy Hook. Not terrorism, just crazy people with free access to firearms, so all the more random an act of violence. Those in the know know that some teenage Israeli boys were abducted in the Palestinian Territories last week. I have no new news that you do not have in America about this horrible incident, but the issue has indeed become a national and international incident, because of the nature of the politics here that, like our own country, consist of unsolved issues.

A different kind of safety issue does come into play here, however. Friends of mine are planning to move to a condo that is now in the building stages. I had a hard-hat tour of the place, and was shown that, by law, every dwelling needs to have one room that is considered a “safe room,” basically, a bomb shelter. The room must be built with certain safety specifications, of course, and I got to see the rooms in the making; they had one in every unit of the building. It is sobering to imagine how living with the expectation of attack at any time creates an altered cultural mindset. There are other war torn places in the world too, but here at least you do have a government that cares enough to require it’s citizens to be safe by enforcing such a building code. I found this interesting, and something I did not know about previously.

Aside from so many other aspects of Israel which set it apart from its immediate and further afar neighbors, I guess I could be anywhere, but, I’m not. I hope my readers will also have a chance to visit this entirely unique, home-like, yet exotic location at least once in their lifetime.

Shabbat shalom (May Peace Be With a You on the Sabbath) from Israel!